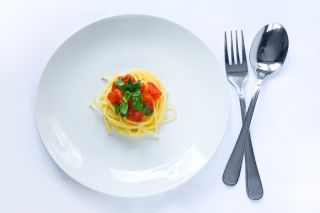 Cutting calories may reduce the risk of age-related diseases and may even help you live longer, a new small study suggests.

People in the study who cut their daily calories by 15 percent for two years experienced two potentially beneficial effects compared with people who kept their regular diet: They had a slower metabolism, which is a sign that their bodies were using energy more efficiently, and less "oxidative stress," a process that can damage cells.

Both a slower metabolism and reduced oxidative stress have been linked with a lower risk of age-related diseases, such as diabetes and cancer, according to the study, published today (March 22) in the journal Cell Metabolism. The researchers think that this is because a slow metabolism leads to less oxidative stress, which, in turn, leads to less damage to cells and organs in the body.

Still, the study was only two years long, so the researchers can't say whether calorie restriction actually results in a lower risk of age-related diseases or a longer life. More studies that last for longer periods of time are needed to determine this. [Extending Life: 7 Ways to Live Past 100]

Eat less for a longer life?

For decades, researchers have observed that calorie restriction tends to prolong life in a number of animal species, but whether it also leads to longer life spans in humans has been unclear.

In the new study, the researchers examined the effects of calorie restriction on 53 healthy, nonobese men and women ages 21 to 50. The participants were randomly assigned to either a calorie-restriction group or a control group that ate what they wanted.

After two years, those in the calorie-restriction group lost nearly 20 lbs. (9 kilograms) on average, while those in the control group maintained their weight.

To look at changes in the participants' metabolism, the researchers used a "metabolic chamber," which is a sealed room that lets researchers precisely measure the number of calories people are burning.

They found that the people in the calorie-restriction group were burning about 80 to 120 fewer calories per day than would be expected based on their weight alone. This was mostly due to slowed metabolism during sleep. The participants in this group also saw a reduction in markers of oxidative stress.

Those in the calorie-restriction group didn't experience harmful effects from their diet — they didn't develop anemia, excessive bone loss or, among the women, menstrual disorders. What's more, they actually had improvements in their mood and quality of life, the researchers said.

Dr. Luigi Fontana, a research professor of medicine at Washington University in St. Louis, called the work a "very nice study," and said the findings confirm that calorie restriction lowers metabolic rate in humans. However, Fontana disagreed with the idea that a lower metabolic rate and reduced oxidative stress are responsible for the longer life spans tied to calorie restriction. Instead, he said some studies show that changes in the way organisms' cells sense nutrients may be responsible.

But regardless of the reason for the link between calorie restriction and longer life, Fontana said many people in the U.S. could benefit from cutting their calories.

"In this country, 70 percent of people are overweight or obese," and obesity is tied to a number of diseases, including heart disease and Type 2 diabetes, Fontana told Live Science. And the only way to lower rates of obesity is with calorie restriction and exercise, he said.