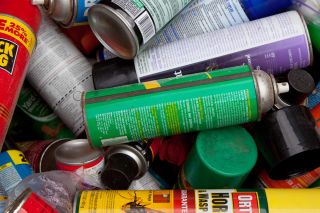 Street drugs in Indianapolis may be laced with an unusual ingredient: household bug spray, according to news reports.

The IndyStar reports that marijuana, synthetic cannabinoids, tobacco and even banana leaves could be intentionally drenched in bug spray. People who take the bug-spray-laced drugs can slide into an unresponsive stupor that lasts as long as 45 minutes, Indianapolis firefighter Scott Lebherz told the IndyStar.

But how does smoking drugs laced with bug spray affect the body and brain? [Krokodil, Molly and More: 5 Wretched New Street Drugs]

Experts aren't sure what kind of bug spray is in the drugs (or even if the drugs actually contain bug spray, but more on that later). However, the active ingredients used in most household bug sprays (as opposed to the repellants you spray on your skin) are pyrethroids — compounds that are structurally similar to pyrethrins, natural insecticides produced by chrysanthemum flowers. Pyrethrins can kill insects by interfering with nervous system signaling, said Dr. Daniel Rusyniak, medical director of the Indiana Poison Center.

Here's how the insecticide works: The brain communicates with the rest of the body through signals sent through the nerves. Nerves transmit these "messages" to the body by firing off an electrical signal. Then, the nerve stops firing, so it can recover and fire again when needed.

"The way pyrethroids work is they keep the firing going, so that the nerve doesn't really recover," Rusyniak told Live Science. "They do so by opening up what we call sodium channels on the nerves. So, you just get repetitive-type firing."

This excessive firing can be lethal; an insect exposed to pyrethroids can become paralyzed and die, Rusyniak said.

Pyrethroids are designed to target insects, not humans. "But at high doses, they will affect the human nervous system," Rusyniak said. The symptoms in humans are similar to those in insects: Excess nerve firing can lead to numbness and tingling, and at higher doses, people may experience convulsion-like activities, such as twitching and tremors, he said. In extreme cases, people may develop seizures or fall into a coma.

Moreover, if a person is smoking a synthetic cannabinoid laced with bug spray, the chemicals could irritate the throat, leading to respiratory depression, Rusyniak said.

Patients with these depressive symptoms can be treated with supportive care, including fluids or a ventilator, and be observed until their body excretes the chemicals. If people have the opposite reaction, meaning they're agitated, twitching and excited, doctors can give them drugs that slow nerve firing, Rusyniak said.

However, it's important to note that the drugs in question — known as KD, Katie and zombie — may not actually be doused with bug spray, said Dr. Lewis Nelson, chairman of emergency medicine at Rutgers New Jersey Medical School, who isn't involved with the Indianapolis cases.

"The names of [these drugs] are not really necessarily descriptive of what they are," Nelson told Live Science. A chemical analysis could easily show whether bug spray is present in these drugs, he added. [Mixing the Pot? 7 Ways Marijuana Interacts with Medicines]

Regardless of whether the drugs contain bug spray, Rusyniak and Nelson agree that smoking bug spray is a bad idea, and also noted that people have concocted and smoked stranger things.

Dealers may be mixing bug spray (or pretending to, at least) with synthetic cannabinoids to make the drug appear more exotic, so they can hike up the price, Rusyniak said. But it would take a lot of bug spray to concentrate it enough to have an effect, so it might not be cost-effective for the dealers to make, he noted.

As for the smokers, "some people are just looking for another high, another chemical or drug to cause intoxication," Rusyniak said. "It sounds very irrational to us … [but] in many ways, it shows the desperation and power of addiction that it would lead people to do things like potentially smoking bug spray."