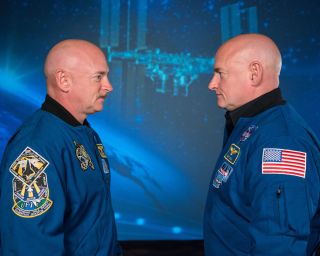 (Editor's Note: This story was updated on March 15 at 1:15 pm E.T. Here is an updated article about Live Science's errors in reporting this study.)

Scott and Mark Kelly are identical twin brothers — at least, they were until Scott spent a year living in space.

When Scott Kelly returned to Earth after a 340-day voyage aboard the International Space Station (ISS) two years ago, he was 2 inches taller than he'd been when he left. His body mass had decreased, his gut bacteria were completely different, and — according to preliminary findings from NASA researchers — his gene expression had changed significantly. (Interestingly, Scott Kelly has since shrunk back down to his initial prespaceflight height.)

A new NASA statement suggests the physical and mental stresses of Scott Kelly's year in orbit may have activated hundreds of "space genes" that altered the astronaut's immune system, bone formation, eyesight and other bodily processes. While most of these genetic changes reverted to normal following Scott Kelly's return to Earth, about 7 percent of the astronaut's gene expression remained altered — and it may stay that way permanently. [Seeing Double: 8 Fascinating Facts About Twins]

The changes are "thought to be from the stresses of space travel, which can cause changes in a cell’s biological pathways," the NASA statement said. "Such actions can trigger the assembly of new molecules, like a fat or protein, cellular degradation, and can turn genes on and off, which change cellular function."

Scott spent nearly a year aboard the ISS as part of a unique NASA project called the Twins Study, which aims to reveal the long-term effects of space travel on the human body and mind. In March 2015, he flew up to the ISS to begin what would become the single longest space mission any astronaut has ever accomplished. Most astronauts stay aboard the ISS for six months at a time. Scott Kelly stayed in orbit for 340 days.

Meanwhile, Scott Kelly's identical twin brother, Mark (a retired astronaut, himself), remained on Earth as a control subject. The Kelly brothers are the only twin astronauts in history, NASA said. Because identical twins are born with identical DNA — the genetic code that tells cells when and how to work — the Kellys made ideal subjects for before-and-after comparison.

Researchers tested both Kelly brothers before, during and after Scott's year in space to map specific changes in the astronauts' physical and mental health. Most of Scott's physical changes — including his 2-inch height gain — proved to be temporary responses to the low-gravity, low-oxygen environment of space, NASA said.

However, genes involved in bone formation, oxygen deprivation, immune system responses and DNA repair remained transformed after Scott Kelly's return to Earth, NASA reported. The reason behind this could involve a complicated reaction to an unusual type of stress: the stress of space.

"Oftentimes, when the body encounters something foreign, an immune response is activated," Christopher Mason, a Twins Study researcher and an associate professor at Weill Cornell Medical College, told Business Insider. "The body thinks there’s a reason to defend itself. We know there are aspects of being in space that are not a pleasant experience, and this is the molecular manifestation of the body responding to that stress."

Understanding why and how these "space genes" activate will be crucial to planning longer manned space missions. The way NASA sees it, Scott Kelly's year in space is a significant "stepping stone to a three-year mission to Mars."

More than 200 researchers in 30 states are helping to analyze the Kelly brothers' various test results, looking for space-induced changes in Scott Kelly's cognition, metabolism, microbiome and many other physiological processes. NASA will publish the comprehensive findings of these tests in a single study later this year.

Editor's Note: This story was corrected to note that Scott Kelly's gene expression changed by 7 percent in space, rather than his genetic code.