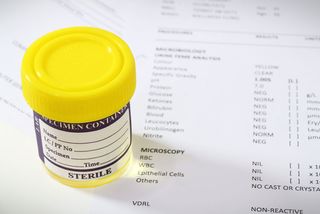 Could your pee reveal your youth? Or perhaps your advanced age? Scientists in China think so. In a study published today (Feb. 27) in the journal Frontiers in Aging Neuroscience, researchers say they have identified a natural chemical in urine that appears in higher concentrations as we age.

The researchers said the chemical may serve as a marker of your "biological age," or how fast you're aging, as opposed to your chronological age, which is based on your birth date. It's easy to detect in urine, too, they added.

The name of the chemical is a mouthful — 8-oxo-7,8-dihydroguanosine, or 8-oxoGsn for short. It's a byproduct of slow, lifelong damage to RNA, an important molecule that interacts with DNA to enable gene expression and to create proteins in the core of most cells. [7 Ways the Mind and Body Change with Age]

If aging is defined as a prolonged buildup of damage to cells and tissues, then something that measures the deterioration of RNA, a molecule essential for maintaining healthy cell function, would be a proxy for measuring aging, said lead study author Dr. Jian-Ping Cai, of the MOH Key Laboratory of Geriatrics at Beijing Hospital and the National Center of Gerontology in Beijing.

Humans age at vastly different rates, based on a combination of genetics and environmental factors. So, finding an accurate biomarker to measure the rate of aging has been akin to a search for the Holy Grail for many in the field of geriatric medicine.

Such a biomarker could be used to determine a person's age at the cellular level and thus identify their risk for developing age-associated diseases, such as arthritis, heart disease and Alzheimer's disease.

Physical features such as wrinkles and gray hair can belie the internal youthfulness that many older people might still have. Someone in their 50s with no gray hair, for example, may be aging faster and at a greater risk for age-related diseases than a gray-haired grandmother in her 70s.

Searching for a marker

Cai and his colleagues, from West China Hospital at Sichuan University in Chengdu, China, searched for a biomarker that would be based on a leading aging theory, called the free radical theory of aging. A free radical is a highly reactive atom or molecule that is produced in the presence of oxygen, in a process called oxidation. If not neutralized by an antioxidant, the free radical can interact with and damage other molecules at a subcellular level.

Free radicals "produced during normal metabolism can cause oxidative damage to biomolecules in cells, such as DNA and RNA," Cai told Live Science. "As we age, we suffer increasing oxidative damage, and so the levels of oxidative markers increase in our body."

The molecule 8-oxoGsn is one such marker; it is a well-known byproduct of the oxidation of guanine, one of the four base pairs found in DNA and RNA.

In previous studies on mice, rats and monkeys, Cai and his colleagues found that levels of 8-oxoGsn increased in the urine of these animals as they aged. In their latest work, the researchers turned to humans — more than 1,200 Chinese males and females between 2 and 90 years old. Similarly, they found an age-dependent increase in urinary 8-oxoGsn in participants 20 years and older. In other words, levels of the biomarker were higher in people ages 20 and older.

Levels of 8-oxoGsn were about the same between men and women, except in postmenopausal women, who showed higher levels. This may be a result of the decrease in estrogen levels that happens during menopause, as estrogen is known to have antioxidant effects, the researchers said.

Cai said his group hopes to validate their findings in a much larger study, which is feasible because the measurement technique they developed can analyze 10 urine samples per hour.

Should 8-oxoGsn prove to be an accurate biomarker for the rate of aging, it could be used in rodents, monkeys and humans to test interventions to slow aging, such as calorie restriction, because changes in the levels of 8-oxoGsn could be tracked over a short span of time instead of the entire life span of the test subject, as is the case for such studies now.