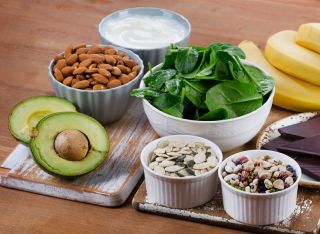 In a new review article, researchers stress the importance of getting enough of this mineral, which aids in the metabolism, or "activation," of vitamin D so it can be used by the body.

"People are taking vitamin D supplements but don't realize how it gets metabolized," study co-author Mohammed Razzaque, a professor of pathology at Lake Erie College of Osteopathic Medicine in Pennsylvania, said in a statement. "Without magnesium, vitamin D is not really useful." [9 Good Sources of Disease-Fighter Vitamin D]

Magnesium is the fourth most abundant mineral in the body after calcium, potassium and sodium, the researchers said. The element activates hundreds of enzymes that are involved in important biological reactions, including the enzymes that play a role in vitamin D metabolism, the review said.

But many people don't get enough magnesium — a national survey from 2005-2006 found that about half of all Americans didn't consume enough magnesium, the review said. According to the National Institutes of Health (NIH), the recommended amount of magnesium is 400-420 milligrams per day for men, and 310-320 mg a day for women.

Previous research has suggested that consuming magnesium can reduce the risk of vitamin D deficiency: A 2013 study found that people who consumed relatively high levels of magnesium were less likely to have low vitamin D levels, compared with people who didn't get enough magnesium.

Some studies have also found that people with higher magnesium intakes have higher bone mineral density, and a lower risk of osteoporosis, compared with people with lower intakes of magnesium, the researchers said. However, more research is needed to see whether taking magnesium supplements can prevent or treat osteoporosis, according to the NIH.

It's important to note that if people take magnesium supplements, they should not consume more than the recommended amount, which is 350 milligrams per day for adults. (This limit is for supplements only. It may be lower than the recommended daily amount because the latter includes magnesium from food as well as supplements.) Too much magnesium from dietary supplements can cause diarrhea, nausea and abdominal cramping; and extremely high intakes can lead to irregular heartbeat and cardiac arrest, according to the NIH.

The review was published in the March issue of The Journal of the American Osteopathic Association.