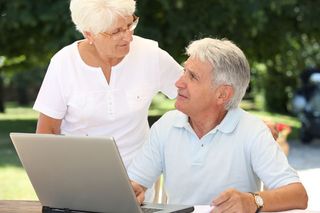 Nearly one in 10 older adults in the U.S. have osteoporosis, according to a new government report.

The findings showed that 16 percent of women and 4 percent of men ages 50 and older have osteoporosis, a condition in which bones become thinner and less dense over time, the report from researchers at the Centers for Disease Control and Prevention (CDC) said.

"Knowing how many people have osteoporosis is important because it puts people at a higher risk for fractures," said Cynthia Ogden, an epidemiologist at the CDC who did not work on the new report.

People can increase their bone mass by doing weight-bearing activities, Ogden said, though the effect of these activities is strongest when done by younger people.

"Given the changing demographics of the U.S. population, this represents a large number of people, and is a focus of public health efforts," she said. "Fractures, and especially hip fractures, can be devastating."

"Lack of estrogen is an important contributor to development of osteoporosis after menopause in women," Ogden said.

The findings also showed that nearly half of adults ages 50 and older have a condition called low bone mass, which can be a precursor to developing osteoporosis.

People with low bone mass may also be at an increased risk for fractures, depending on a number of other factors, such as their age and body mass index (BMI), Ogden said.

The previous report may have underestimated the number of people with osteoporosis at that time, Ogden said. Researchers had measured study participants' bone mass at only one site in the body — the hip. The new estimate is based on measurements taken at both the hip and the lower part of the spine. In some people, osteoporosis may be present at one site but not the other, so taking both into account is important, Ogden said.

The new findings suggest that the rate of osteoporosis has decreased, Ogden said. In the new report, 5 percent of all adults had osteoporosis when only the measurements taken at the hip were considered.

Researchers aren't sure why the rate of osteoporosis may have dropped. There have been investigations looking into the effects of medications and other factors, but the drop cannot fully be explained, Ogden said.

Last year, the U.S. Preventive Services Task Force expanded its guidelines about screening for osteoporosis. The task force now recommends that women ages 65 and older should be screened at least once for osteoporosis, and so should postmenopausal women younger than 65 who are at high risk for the disease.

The new report is based on data gathered during the National Health and Nutrition Examination Survey, which includes a nationally representative sample of study participants and is conducted by the CDC. Survey participants complete questionnaires and undergo physical exams.

Pass it on: About one in 10 people over 50 have osteoporosis.