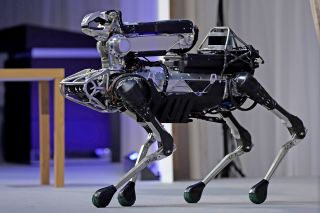 SpotMini is a robotic dog that can act as a human assistant in the home or office.
(Image: © Boston Dynamics)

An amazing video of a robot dog fighting off a human as it tries to open a door is not only creepy, but it also has raised the question: Why are we teaching a robot to fight back against humans?

The "dog" in question is the SpotMini, a 66-lb. (30 kilograms) robot designed to fit comfortably in a home or an office. In the video, the dog is shown attempting to open a door—when a human comes with a hockey stick and shoves the robot's grasping arm away from the door knob. The robot manages to open the door anyway, and even continues standing when a human tries to pull "him" away from the door using a huge leash.

It turns out, any successful robot assistant for the home needs to be good at dealing with "disturbances," according to the company ­— and that may sometimes include pesky humans. [Robots on the Run! 5 Bots That Can Really Move]

Unlike some of Boston Dynamics' other robots, such as the humanoid Atlas, SpotMini isn't designed to help people in a disaster situation. Instead, he's meant to be a vaguely cute home or office assistant. But that means he actually needs extra capabilities that a disaster robot might not.

For instance, to be useful, a fetching robot would need to be able to pick up objects of different sizes and bring them to its "master," which many battlefield robots aren't designed to do. And the home environment also involves challenges, such as doorways, stairs and slippery obstacles, which earlier versions of the robot struggled with. So far, Boston Dynamics has shown that progressive iterations of SpotMini can do these tasks: The company  has posted videos of this little dog climbing stairs, crawling under tables, loading a dishwasher, filling the trash and bringing someone a Diet Coke.

And of course, many homes have children, who are not known for their restraint when dealing with pets and other moving objects, as this video montage of babies riding Roombas reveals.

Boston Dynamics doesn't explicitly mention the hazards of small children, but its tersely-worded description of the robot in the YouTube video does hint at that type of challenge.

"The ability to tolerate and respond automatically to disturbances like these improves successful operation of the robot," the company wrote in the caption.