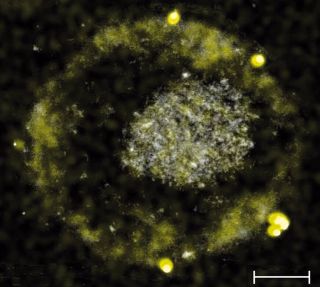 Turning straw into gold is old hat: A bizarre species of bacteria practices a form of alchemy every time it breathes.

"When confronted with ever more gold, some bacterial cells are completely encased with gold," study leader Dietrich Nies, a molecular microbiologist at Martin Luther University in Germany, told Live Science. At most, these gold shells are mere micrometers in size, Nies said, but they can aggregate into sand-grain-size chunks. [Extreme Life on Earth: 8 Bizarre Creatures]

C. metallidurans survives in soils that are full of heavy metals, which are typically toxic to biological organisms. Nies and his colleagues discovered in 2009 that the bacteria could deposit solid gold into its immediate environment, but they didn't know how.

Now, they have an answer. The bacteria are surrounded by two membranes, Nies said, with a space called the periplasm in between. They need trace amounts of copper to conduct their metabolic processes, but the copper is toxic in large doses; so the bacteria have a special enzyme called CupA that can pump excess copper from the interior of the cell into the periplasm, where it can't do any harm.

The problem arises when the bacteria encounter gold ions, which are gold molecules that have lost one or more of their electrons and are thus unstable. These ions are easily imported past both cellular membranes into the interior of the cell, where they can cause damage on their own. The ions also inhibit the CupA pump that gets rid of excess copper and, as such, can compound damage from copper ions that make their way into the cells.

Fortunately for the bacteria, they have a workaround: another enzyme called CopA. This enzyme steals electrons from the copper and gold ions, transforming them into stable metals that can't easily pass through the interior membrane of the cell.

"Once the metallic gold nanoparticles [are] formed in the periplasm, they are immobilized and less toxic," Nies said.

Once the periplasm is stuffed with inert metal, the outer membrane splits and spills out the shiny nuggets, Nies said.

Understanding the process is important, according to Nies and his colleagues, because the bacteria essentially transform solid gold into a highly soluble gold compound and then back again. If humans could mimic the process, it would be possible to take ore with a very low percentage of gold, transform the precious metal into a water-soluble version of itself, dissolve it from the rock and then — voila —  transform it back into the shiny solid gold used in everything from jewelry to electronics. Right now, the only way to do that is to use mercury, which is very toxic.

The researchers reported their findings in January in the journal Metallomics.