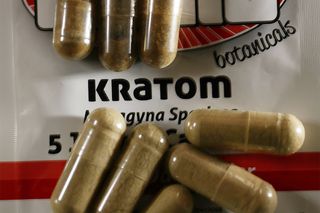 What is kratom? That depends on whom you ask. According to the U.S. Food and Drug Administration, the herbal substance falls into the category of opioids. But what exactly makes something an "opioid"?

On Tuesday (Feb. 6), FDA Commissioner Dr. Scott Gottlieb announced the results of new research suggesting that kratom compounds affect the body just like opioids do. Using a computer model, FDA researchers found that most of the compounds in kratom bind to opioid receptors in the body. Gottlieb also said that the FDA has received reports of 44 deaths involving kratom.

Kratom, also known as Mitragyna speciosa, is a plant that grows in Thailand, Malaysia, Indonesia and Papua New Guinea, according to the FDA. Herbal products containing kratom are gaining popularity in the U.S. — people are taking them to treat pain, anxiety or depression, as well as symptoms of opioid withdrawal.[America's Opioid-Use Epidemic: 5 Startling Facts]

Based on the new FDA research, along with information from previous studies and reports of harmful effects tied to kratom, "we feel confident in calling compounds found in kratom, opioids," Gottlieb said in a statement.

According to the Centers for Disease Control and Prevention, an opioid is a natural or synthetic chemical that interacts with opioid receptors in the body. Based on this definition, compounds in kratom are opioids, because they do act on opioid receptors, said Wes Hunter, the director of pharmacy at UCHealth Yampa Valley Medical Center in Steamboat Springs, Colorado.

It's true that one of the main active compounds in kratom, called mitragynine, is structurally different from morphine, one of the oldest known opioid drugs derived from the opium poppy, according to a 2012 review paper published in the Journal of Medical Toxicology. But Hunter noted that some synthetic opioids, including fentanyl and methadone, don't look much like morphine in their structure, either.

"Even though it's not a direct descendent of the opium plant, it still has direct effects on the opioid receptors," Hunter told Live Science.

Hunter added that some synthetic opioids are derived from materials found in coal tar. "It's not like you need an opium poppy to have opioid effects," he said.

However, Hunter said that the effects of opioids fall on a spectrum; for instance, both fentanyl and loperamide (sold under the brand name Imodium) are opioids, but the former is a powerful painkiller that's up to 100 times more potent than morphine, while the latter is sold over the counter as an anti-diarrheal medication. Loperamide typically doesn't cause a "high" (though people may take extremely large doses of the medication in an attempt to get high, Live Science previously reported).

Studies on kratom have found that at lower doses, the drug has a stimulant effect, while at higher doses, it has an opioid-like sedative effect, according to the Journal of Medical Toxicology paper.

Although a number of deaths have been linked to the use of kratom, it's unclear if the deaths are a direct result of using the drug, Marc Swogger, an associate professor of psychiatry at the University of Rochester Medical Center in New York, told Live Science in a 2016 interview. That's because, in many of these cases, people died after they took kratom together with other substances, such as alcohol or other opioids, according to reports of cases released by the FDA.

In the FDA statement, Gottlieb said that "cases of mixing kratom, other opioids, and other types of medication is extremely troubling." That's because "the activity of kratom at opioid receptors indicates there may be similar risks of combining kratom with certain drugs, just as there are with FDA-approved opioids," Gottlieb said.

"There is no evidence to indicate that kratom is safe or effective for any medical use," Gottlieb added. "Kratom should not be used to treat medical conditions, nor should it be used as an alternative to prescription opioids."

In addition, because products containing kratom are not regulated by the FDA, there is a possibility that the products could be contaminated with other drugs, which together could have harmful effects, Hunter said. For example, in 2010, a product called Krypton, which contained both mitragynine and the opioid O-desmethyltramadol, was linked with nine deaths in Sweden, according to the Journal of Medical Toxicology paper.

Some people have also reported withdrawal symptoms after using kratom, the paper said. Given these effects, there is an "urgent" need to study the abuse potential of kratom, according to the paper.

For people who are seeking treatment for opioid addiction, who are thinking about using kratom, "I urge you to seek help from a health care provider," Gottlieb said. "There are safe and effective, FDA-approved medical therapies available for the treatment of opioid addiction," he said.