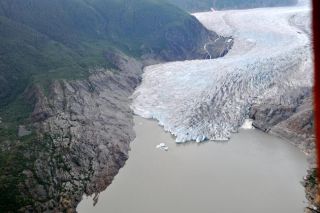 Environmental engineer Michael Nassry studies glacial streams from melting glaciers in Alaska. This shot shows new forests above the shrinking Mendenhall Glacier. It's rare to see a developing forest above a glacier. This picture highlights how these landscapes are rapidly changing.
(Image: © Durelle Scott, Virginia Tech.)

Being on top of an Alaskan glacier was not as cold as Michael Nassry expected.

Nassry grew up hunting, fishing, hiking and camping in Western Pennsylvania, near his home in Hopwood. "I like the outdoors," he said.

With that motivation, he decided he wanted to be an environmental engineer, and found himself in the agricultural and biological engineering program at Penn State University, where he focused on soils and water research. Now a Ph.D. student in biological systems engineering at Virginia Tech, he has fine- tuned his interest to nutrient transport in rivers and streams.

"I look at what is taken up, what is used, what is passed through to down-river systems," he said, referring to the nutrients in waterways that exercise tremendous control over whether aquatic life thrives, or collapses. He is guided in this focus by his advisor Durelle "Scotty" Scott.

"Scotty has a lot of projects going on, but I was attracted to the Alaska project because I haven't had a lot of exposure to glacial systems," Nassry said. "What is happening to these watersheds is a hot topic."

"Within a small area, you can examine watersheds that range in glacial coverage," Scott said. "This allows us to look at how these systems respond to climate change."

Nassry, traveled to Alaska with Scott and undergraduate student Andrew Jeffrey, now graduated, to join Eran Hood, associate professor of hydrology at the University of Alaska Southeast, and his two students, for two weeks in July. It was all part of Scott's NSF-funded research to measure the movement of nutrients out of glaciers.

All of the study sites were close to and accessible from Juneau, and the July period, when the glaciers are melting, offered better weather for the helicopters carrying the researchers to the glacier tops.

In addition to the milder-than-expected temperatures, Nassry was surprised at how quickly the ice melted around the ground covers the scientists slept on. "When we picked up the tarp, the ice underneath was about an inch higher than the surrounding ice." Nassry also noticed a lot of streams on top of the glacier, some of them large. "I didn't expect so much surface flow," he added. "I thought more melt would be through the ice."

The research team was atop the ice to perform an injection experiment. First they put dye in a stream so they could measure its speed. The next day, for three hours straight, they injected a salt solution and several solutions containing nutrients into the stream. The team then collected water samples at three downstream locations, after the injection pumps were turned off, to determine what flowed out and what was absorbed. Nassry's jobs were to calibrate the injection pumps and collect background samples above the injection point.

The task and clean-up took until 10 or 11 p.m., by which time the helicopters had quit for the day, so the researchers slept on the ice — or not. "It was so bright, I couldn't sleep at all," Nassry said. Hood had been prepared for the overnight and provided the sleeping bags. The one Nassry used came complete with teddy bear, having previously been used by Hood's young daughter.

The next task was to sample the base of the different watersheds, some of which had more glacial coverage than others. "For the Lemon Glacier, Andrew, Eran, Scotty, and I were dropped at the face by a helicopter early in the morning, then we sampled and hiked the whole length of Lemon Creek — six to eight hours," Nassry said.

"Scotty and Andrew biked up a path to the Herbert glacier and sampled the stream on the way back. And Eran and I hiked a trail at Montana Creek and sampled on the way down. That only took a few hours," Nassry said. The Mendenhall River is shrinking at a far more rapid pace, as evidenced by data from its stream gauges.

"Eran analyzed samples for carbon in his lab and shipped us the remaining samples," Nassry said. "In Scotty's lab we're measuring nutrients, carbon, anions, and water isotopes. We used a US Geological Survey computer model, called OTIS, to simulate the downstream flow of water and salts along the reach.  Once we achieved a calibrated model for the salts, we knew the hydrology — or what the water was doing. Our next step is to apply the model to each of the biologically available nutrients added during the injection experiment."

In summer 2010, the researchers, including Nassry, will work in streams between the glaciers and the gulf. "This spring," Nassry said, "I'll be designing those experiments and testing them in Stroubles Creek [near the Virginia Tech campus]."  And when they head back, the summer 2010 team will include a local K-12 teacher so she can learn what it's like to do environmental research, experiences to share with other teachers and her students.