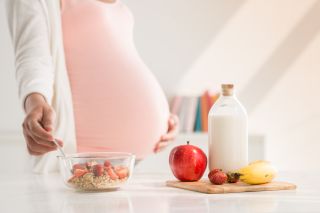 Drinking probiotic-rich milk during pregnancy may decrease a woman's risk of developing two pregnancy-related problems, a new study from Norway suggests. But the stage of pregnancy in which a woman consumes these probiotic-rich beverages appears to play a role.

Preeclampsia is a serious complication in which pregnant women have high blood pressure and a high level of protein in the urine. The condition can have systemic, or body-wide, effects.

Both conditions — preeclampsia and preterm delivery — are associated with a higher degree of inflammation in the body than can be expected in a normal pregnancy, said lead author Dr. Mahsa Nordqvist, an OB/GYN at Sahlgrenska University Hospital in Sweden.

Probiotics — or "good" bacteria — might help reduce inflammation in the body and, therefore, potentially reduce the risk of these pregnancy complications, Nordqvist told Live Science. [8 Tips to Be a Probiotic Pro]

In the study, the researchers looked at data collected from about 70,000 pregnant women in Norway, who were participants in the long-running Norwegian Mother and Child Cohort Study. As a part of that study, the women completed questionnaires about their health history and lifestyle habits at the 15th and 30th week of pregnancy, and provided information about their diets at the 22nd week of pregnancy.

Products such as kefir, milk containing the bacteria Lactobacillus acidophilus, and yogurts with added probiotics might be considered comparable products to the probiotic milks described in the study, Nordqvist added. However, the researchers did not look at probiotic supplements because only a very small percentage of the women in the study said they used them.

About 23 percent of the women in the study reported that they drank probiotic milk before becoming pregnant, about 38 percent drank it during early pregnancy (meaning up until the 13th week of pregnancy) and 32 percent consumed probiotic milk during late pregnancy (between the 13th and 30th week of pregnancy). The women drank about 1.5 cups a day, on average, of milk products containing the live active bacteria.

The results appear to suggest that consuming probiotics late in pregnancy can lower the risk of preeclampsia by reducing symptoms, such as high blood pressure and protein in the urine, which tend to occur in the third trimester, Nordqvist said.

One explanation for this result is that preterm delivery can often be related to infection, which leads to inflammation in the body, Nordqvist said. The results suggest that if the body's inflammatory response can be lowered at an early stage of pregnancy, this may lower the risk of giving birth too early, she said.

The researchers noted that the study had limitations. For example, the researchers weren't able to evaluate which of the probiotic milk products or which strains of bacteria in them may have inflammation-lowering effects. In addition, the study did not prove cause-and-effect; instead, it showed an association between probiotic milk and these pregnancy complications.

Dr. Susanne Bathgate, a maternal-fetal medicine specialist at The George Washington University School of Medicine and Health Sciences in Washington, D.C., said that the study was ambitious and that one of its strengths was that it looked at dietary information from a large number of pregnant women. Bathgate has researched preeclampsia but was not involved in the study.

So, the idea that reducing inflammation might change pregnancy outcomes makes sense, but more research is needed before doctors can make recommendations that pregnant women drink probiotic milk to help prevent complications, Bathgate told Live Science. Probiotic milk may be a fairly common part of people's diet in Norway, but it's not in the United States, she said.