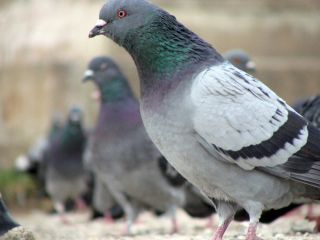 Pigeons might do better than humans at game shows, at least on "Let's Make A Deal."

These new findings — involving the pigeons superior ability to solve a perplexing statistical problem — might in turn shed light on why humans are bad at solving certain kinds of problems, scientists added.

The so-called Monty Hall problem is a well-known puzzle named after the original host of the game show "Let's Make A Deal," who presented contestants with three doors, one of which held a prize, the other two only goats. The prize and the goats were placed randomly behind the doors beforehand, and stayed where they were throughout. After the contestant made a guess, Monty Hall would always open one of the remaining doors that he knew did not contain the prize. The player was then always given the option of staying with their initial guess or switching to the other unopened door.

Most people opted to stay with their initial guess, despite the fact that switching actually doubled the chances of winning.

To see why the apparently illogical choice of switching is actually better, one must understand that before the host opened one of the three doors, the contestant did not know the location of the prize, and thus when he or she chose a door, the contestant had a 1-in-3 chance of being right. That does not change even after the host opened a door. If the probability of the first door the contestant chose remained the same, and there were only two doors left, that meant the remaining unopened door must have had a 2-in-3 chance of being right — that is, it had twice the chance of holding the prize.

The fact that people do badly at this problem is true across cultures, including Brazil, China, Sweden and the United States. Indeed, when the Monty Hall problem appeared in the "Ask Marilyn" column in Parade magazine along with an explanation of the solution, the columnist received some 10,000 letters, 92 percent of which disagreed with her solution. This failing holds true even of many statisticians and mathematicians who should know better, including Paul Erdos, perhaps the most prolific mathematician in history.

To shed light on why humans often fall short of the best strategy with this kind of problem, scientists investigated pigeons, which often perform quite impressively on tasks requiring them to estimate relative probabilities, in some cases eclipsing human performance. Other animals do not always share the same biases as people, and therefore might help provide explanations for our behavior.

Scientists tested six pigeons with an apparatus with three keys. The keys lit up white to show a prize was available. After the birds pecked a key, one of the keys the bird did not choose deactivated, showing it was a wrong choice, and the other two lit up green. The pigeons were rewarded with bird feed if they made the right choice.

On the other hand, 12 undergraduate student volunteers failed to adopt the best strategy with a similar apparatus, even after 200 trials of practice each.

Why people don't get it

One possible reason people are worse than pigeons at the Monty Hall problem might be due to how people learn.

Past research with university students found they almost universally believed that staying and switching were equally likely to win, while younger students believed this less. Only in the youngest group tested — a bunch of 8th graders — did a significant although small fraction of students figure out switching was the best strategy. It may be that education leads people to acquire ways of thinking that, while efficient, can interfere with certain kinds of performance.

"During 'education,' which I would take to encompass not just formal education, but also one's general life experience, we acquire heuristics — rules of thumb that, either consciously or unconsciously, allow us to respond to a complex world quickly," said researcher Walter Herbranson, a comparative psychologist at Whitman College in Walla Walla, Washington. "But while these heuristics are fast and generally accurate, they're not correct 100 percent of the time."

Pigeons likely use empirical probability to solve the Monty Hall problem and appear to do so quite successfully.

"Different species often find very different solutions to the same problems," Herbranson said. "We humans have ways of tackling probability-based problems that generally work pretty well for us, the Monty Hall dilemma being one notable exception. Pigeons apparently have a different approach, one that just happens to be better suited to the Monty Hall dilemma."

Empirical probability is a slower, less elegant, brute-force method that can be tricked by the kind of random fluctuations seen in real data, Herbranson said, but it doesn't employ any mental rules of thumb that can lead to traps such as the Monty Hall problem. In a similar way, the visual systems we depend on to quickly make sense of the world around us can lead to our susceptibility to visual illusions, he added.

Indeed, the aforementioned mathematician Paul Erdos demonstrated the power of empirical probability nicely as well. According to his biography, Erdos refused to accept the explanations of colleagues for the correct solution, and was eventually convinced only after he was shown a simple computer simulation than ran the problem hundreds of times. In other words, "after Erdos approached the problem like a pigeon, he was able to embrace the right answer," Herbranson said.

Herbranson and his colleague Julia Schroeder detailed their findings in the February issue of the Journal of Comparative Psychology.