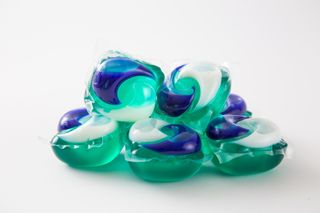 Laundry pods have long been viewed as hazardous products for young children, but now, teens are deliberately chomping down on the pods as part of a new online fad called the Tide Pod Challenge.

But experts say eating laundry pods can be very risky, even for adults, and can cause severe symptoms or even death.

"These are really dangerous products to be playing with," said Dr. Marcel Casavant, the division chief of toxicology at Nationwide Children's Hospital in Columbus, Ohio. "I would discourage anybody" from doing this, Casavant said. [9 Weird Ways Kids Can Get Hurt]

The idea of deliberately eating laundry pods started as a joke. For example, in 2017, the comedy website CollegeHumor created a fictional video in which a college student tries to resist eating laundry pods, only to end up gorging on them and being taken to the hospital. But now, people — mostly teens — are really attempting to eat the pods, and they're posting videos of themselves doing it, according to CBS News.

Laundry pods are packets of highly concentrated detergent. For years, consumer groups such as the Consumer Product Safety Commission have been warning about the dangers of these pods for young children, who may accidentally ingest them. In 2017, poison control centers in the U.S. received more than 10,000 reports of children under age 5 being exposed to the pods, according to the American Association of Poison Control Centers.

Serious health effects of laundry-pod exposure seen in children include severe vomiting, severe breathing trouble, burns to the esophagus, and coma, as well as burns to the eyes and skin, according to the National Capital Poison Center, an accredited poison control center in Washington, D.C.

But the pods can also cause serious health effects in teens and adults.

"The laundry pods have some pretty strong chemicals in them," Casavant told Live Science. These chemicals can cause destructive burns to the esophagus or to the airway, which can lead to serious breathing problems, Casavant said. There have also been reports of adults with dementia who died after eating laundry pods, he added.

In 2013, Procter & Gamble, which makes Tide Pods, began packing the pods in opaque containers (as opposed to see-through containers), and later in the year, the company introduced child-proof latches to the containers.

"Our laundry [pods] are a highly concentrated detergent meant to clean clothes … They should not be played with, whatever the circumstance is, even if meant as a joke," Tide representatives said in a statement to USA Today.

If people are exposed to laundry-pod chemicals, they should call poison control at 1-800-222-1222 to get medical advice, Casavant said.