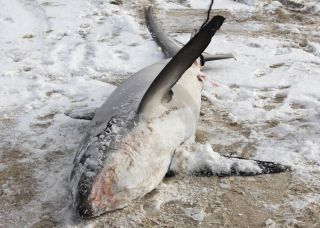 A frozen, dead thresher shark washed up on Cape Cod at the end of December.
(Image: © Atlantic White Shark Conservancy)

As the Arctic blast continues to roil the Eastern Seaboard with gusty winds and frigid temperatures, at least four thresher sharks have been found frozen off the coast of Cape Cod.

Is Old Man Winter to blame? Probably not, as the sharks likely died not from hypothermia but from stranding themselves in shallow waters as they attempted to migrate south, according to Greg Skomal, the senior fisheries scientist who leads the shark research program for the Massachusetts Department of Fish and Game.

Unlike blue sharks, mako sharks and basking sharks, thresher sharks tend to linger in the Gulf of Maine until late December, Skomal said. Characterized by their long, scythe-like tails, the animals possess endothermic abilities, meaning they can retain their metabolic heat to a certain extent. [On the Brink: A Gallery of Wild Sharks]

Indeed, a recent tagging study found that the animals leave waters only when they dip below temperatures of 46 degrees Fahrenheit (8 degrees Celsius). As a result, many of them don't start their journey to warmer climes before midwinter.

But the current cold snap, a result of a jet stream that's channeling Arctic air from northwest Canada, has ushered a spate of rapid cooling, forcing the sharks to scramble south with new urgency.  And the shape of Cape Cod, with its sandy, hook-like projections, extensive mudflats and extreme tidal fluctuations, can prove especially treacherous if you're navigating incautiously, according to Skomal.

"If you look at the shape of Cape Cod as a landmass, it really is kind of a natural trap," Skomal said. "Some of the sharks likely got around Cape Cod and moved to the east of Cape Cod, while others made the mistake of traveling closer to shore and got caught inside Cape Cod Bay, becoming entrapped in the landmass."

Skomal admits that the scenario he's describing is conjectural. "There [are] a number of scenarios that can play out here and we don't know which one is correct," he said.

Even necropsies of the carcasses have proven unhelpful.

"There's not much you can do to determine what caused [a shark's] death if there's no signs of chronic organ damage or something to that effect," Skomal said. "You really just can't tell if it's some other cause like dramatic change in temperature or respiratory failure."

What experts do know, however, is that that chances of survival for a beached shark are slim to none.

While air-breathing marine animals like whales, dolphins and turtles can succumb to cold shock as a cause of death after washing up onshore, simply by virtue of being alive, the thresher sharks were probably long dead before they froze, Skomal said.

"When sharks get in super-shallow water, particularly in tidal areas, they can't negotiate well around sandbars and shoaling systems and the changes that occur in depth with tide," Skomal said. "And they tend to strand in these shallow water areas. That leads to their demise fairly quickly because they can't breathe, so in essence, they drown."