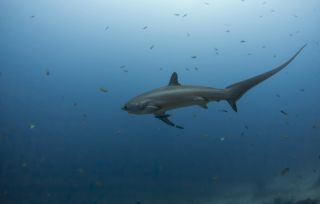 Thresher sharks use their long tails to smack and stun fish before they eat them.
(Image: © nicolas.voisin44 | Shutterstock)

The long, elegant thresher shark tail — which spans nearly half the length of the animal's body — has mystified biologists for decades. Researchers have speculated that the sharks use their tails for hunting, and have observed some tail-smacking behavior in controlled environments. But, until now, nobody has been able to spot the sharks tail slapping in the wild.

Biologists from the United Kingdom and the Philippines teamed up to collect video footage of thresher sharks in the wild, and have now definitively shown the sharks smacking and stunning schools of prey in their natural environment. The sharks probably evolved this behavior as a way to overcome the inefficiency of hunting one small fish at a time, the team reports today in the journal PLOS ONE. [On the Brink: Images of Wild Sharks]

The group thinks tail slapping is the shark's primary hunting method and may even create underwater shockwaves.

"We haven't seen them do anything but that," said Oliver Simon, founder of the Thresher Shark Research and Conservation Project in the Philippines and a biologist at the University of Liverpool in the United Kingdom. "Evolution doesn't provide you with something like that unless you intend to use it that way."

Other marine predators — including killer whales and dolphins — also smack prey with their tails, but the thresher shark is the only marine animal to rely so heavily on that method.

To collect the video footage, the researchers went scuba diving among harmless 12-foot-long (4 meters) pelagic threshers, which are the smallest of the three thresher species. The team generally observed hunts from afar, but occasionally approached the scene directly after a slap to gather fish prey for analysis. They found that many fish were simply stunned by the smack, but others had been maimed and killed. One slap impacted an average of three fish, but sometimes reached as many as seven.

The physical contact of the tail against the fish, along with the force of waves generated through the water, probably work together to stun the fish, Simon said. The group also found stronger slaps by the sharks generated air bubbles underwater, suggesting the slaps were strong enough to break water molecules into gas.

"We weren't able to prove this, but I speculate that there is a localized explosion or shockwave that is created by this hunting event," Simon told LiveScience. "It occurs with such strength and force that it causes water molecules to break apart into its principal components of hydrogen and oxygen, which is gas. That is quite a remarkable bit of power."

The researchers plan to use their hours of footage to further examine the mechanics of the tail slap. They also hope to determine whether the slaps generate any underwater noise that might help to stun the fish.

Pelagic thresher sharks are a threatened species, and their populations have declined by up to 80 percent within the past decade due to overfishing, Simon said. The team hopes  the research will help conservation groups better understand thresher habitat and develop more informed efforts to protect the sharks.