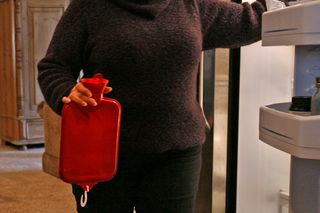 A woman at Belle Vitta, a lifestyle re-education center, reaches into the refrigerator for coffee so she can fill her enema bottle.
(Image: © Alamy)

Colon cleansers have landed people in the hospital, but that hasn't stopped actress Gwyneth Paltrow from touting one — known as the Implant O'Rama System — on her lifestyle website, goop.

In a new detox guide, goop describes the Implant O'Rama as an "at-home coffee enema," which claims to relieve people from "depression, confusion, general nervous tension, many allergy related symptoms and, most importantly, relief from severe pain," according to the product's web page.

But doctors beg to differ. [25 Medical Myths That Just Won't Go Away]

Colon cleansing "is not wise — particularly if you have a history of gastrointestinal disease (including diverticulitis, Crohn's disease or ulcerative colitis) or a history of colon surgery, severe hemorrhoids, kidney disease, or heart disease," as these conditions can increase the risk of adverse effects,  according to a 2011 report in The Journal of Family Practice.

The colon, also called the large intestine, helps rid the body of food waste after all the nutrients have been extracted from the digested food. This waste is then stored in the sigmoid colon (the last part of the colon before the rectum), where it is kept until the body is ready for a bowel movement.

Given that the colon processes waste, it's not that surprising that colon cleansing has been practiced since ancient times, when it was believed that intestinal waste in the colon could poison the body, according to the 2011 report. The procedure was revived in the early 1900s, but it fell out of favor after a 1919 paper by the American Medical Association condemned the practice. However, the popularity of colon cleansing has rebounded in recent years, the researchers said.

But the practice can be dangerous, whether or not coffee is involved. The report reviews two case reports, including a 31-year-old woman with Crohn's disease who came to the emergency department with symptoms of weakness, fever, nausea, vomiting and diarrhea. The woman reported she had gone to a cleansing center for a colonic cleansing two days prior, but stopped 15 minutes into the procedure after developing diarrhea, nausea and vomiting, the researchers said.

In another case, a 49-year-old man who used a colon cleanser developed symptoms that included dizziness, weakness, vomiting and diarrhea. A colonoscopy showed that he had chronic and acute inflammation, prompting a gastroenterologist to diagnose him with "herbal intoxication," the researchers said.

"The patient generally lies on a table and water (with or without additional herbs or compounds) is pumped through the rectum via a tube," the researchers wrote in the report. "Unlike enemas, for which a small amount of fluid is used, however, colon cleansing calls for a large volume of fluid — up to 60 liters [15 gallons] — to be introduced into the rectum [not all at once, but over the course of the procedure]. Fluids and waste are expelled through another tube. The procedure may be repeated several times."

However, despite claims that this cleansing can aid in "detoxification," boost the immune and circulatory systems and enhance cognitive ability, evidence shows otherwise. [7 Embarrassing Health Problems]

"Despite colon cleansing's long history and current popularity, the literature does not support its purported benefits," the researchers wrote in the report.

Colon cleansing can cause mild side effects, such as cramping, abdominal pain and nausea, or serious problems, including renal failure and electrolyte imbalance, the researchers said. Moreover, the devices used in the cleansing are not approved for colon cleansing by the Food and Drug Administration.

It's important to note that colon cleansing practitioners are not licensed by a scientifically based organization, the researchers said. "Rather, practitioners have undergone a training process structured by an organization that is attempting to institute its own certification and licensing requirement," they wrote.

Paltrow has already landed in hot water for encouraging "vaginal steaming" (which isn't necessary, because the vagina can clean itself) and selling jade eggs, telling readers to insert them into the vagina as a way to boost reproductive health. (There's no evidence that the eggs work, and they may alter the bacteria in the vagina and its pH.)