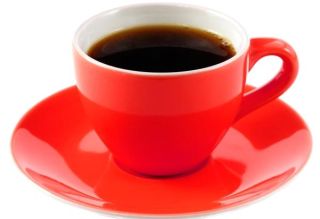 Some people drink their coffee; others use it in a coffee enema.

Some people say they're addicted to coffee, but a couple in Florida has taken their coffee habit to a whole new level: coffee enemas.

Mike and Trina, who declined to give their last names (for reasons that may be obvious), are so hooked on coffee enemas that they use them to cleanse their colons at least four times daily, though Trina admitted using them up to 10 times in a single day, according to ABC News.

"I love the way it makes me feel," Trina told ABC News. "It gives me a sense of euphoria." Both she and Mike work from home — otherwise, their frequent enemas might not be possible.

"I had a lot of stomach problems, digestive problems with my kidney and my liver," Trina told ABC News. "I started research and it led into coffee enemas, and I really started to feel the benefit. I felt like I was living for the first time in years." (The couple is part of the TLC show called "My Strange Addiction.")

No benefits, many risks

Medical research, however, reveals that not only are there no proven benefits to coffee enemas, there are some significant risks to using enemas for "colon cleansing" on a frequent basis.

"No scientifically robust studies in support of this practice" exist, according to an article co-authored by Dr. Ranit Mishori, a physician at Georgetown University in Washington, D.C. The study was published in the August 2011 issue of The Journal of Family Practice.

Mishori and her colleagues found the most common side effects of colon cleansing are nausea, vomiting, diarrhea and abdominal pain. Depending on the solution used, patients can experience a serious loss of electrolytes — and coffee enemas are linked to potassium depletion.

Medical conditions such as kidney and liver failure, air emboli, rectal perforations, blood infections, colitis (inflammation of the colon) and death from dysentery can also result from colon cleansing. [The 9 Most Bizarre Medical Conditions]

Coffee enemas got their start as one part of the so-called Gerson treatment, according to the American Cancer Society (ACS). Named for Dr. Max Gerson, who developed the therapy in the 1940s, the treatment also calls for taking supplements, drinking large amounts of raw fruit juice and getting intravenous injections of calves' liver extract.

But the Gerson treatment — which is no longer offered in the United States — is linked with serious health problems, including death, the ACS reports. There's at least one report of hot enemas causing burns, scarring and rectal perforation.

And after frequent or regular enema use — like that of Mike and Trina — the colon and rectum can eventually lose the ability to generate proper bowel movements, making a person utterly dependent on enemas for their bowel movements.

Enemas are recommended by physicians only as a last resort in cases of severe constipation. But that hasn't prevented enemas from being misused for a number of ends — including getting very drunk very quickly.

A student at the University of Tennessee was hospitalized last year after a fraternity party that involved alcohol enemas. The student had a blood-alcohol level of 0.40 — five times the legal limit, and well within what doctors called the "death zone" for alcohol poisoning, CNN.com reported.

And in 2004, a Texas man died after his wife administered a sherry enema, causing his blood alcohol level to skyrocket up to 0.47, according to the Houston Chronicle. Because an alcohol enema bypasses the stomach and other digestive organs, the body doesn't metabolize the alcohol, which can cause very rapid alcohol poisoning.