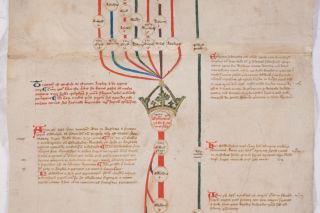 A team of researchers in New Zealand is working to make an astonishing and mysterious medieval document available for public consumption.

The 600-year-old "Canterbury Roll" dates to the Wars of the Roses — the bloody, 33-year-long civil war between the English House of Lancaster and the House of York that ran from 1455 to 1487. (King Richard III, of the House of York, died toward the end of that war in 1485 during the Battle of Bosworth Field.)

Researchers and students at the University of Canterbury, together with a team of visiting experts from the United Kingdom, are working to translate and interpret the document. The U.K. experts are looking specifically for hidden information in the roll, such as places where one house may have covered up the other house's writing, which could now be detected and read using modern technology and techniques.

The first results of the researchers' work already appear online in an interactive version of the scroll, where individual passages come alive with their translations as readers zoom and click on them. [Medieval Torture's 10 Biggest Myths]

"It's visually striking. The Wars of the Roses are what 'Games of Thrones' is based on, and this is the Wars of the Roses laid out across a 5-meter [16 feet], visually spectacular document," Chris Jones, a medieval historian and a researcher on the project from the University of Canterbury, said in a statement. "It is not the only manuscript roll from this period to exist in the world, but, uniquely, it features contributions from both [of] the key players in the Wars of the Roses — it was originally drawn up by the Lancastrian side in the conflict but it fell into Yorkist hands, and they rewrote part of it."

The roll itself is a highly fictionalized telling of English royal family history, with the lineages of the warring families traced back to Brutus of Troy — a legendary, likely imaginary figure whom medieval Britons believed was the first king of England — and then further back to the biblical ark builder, Noah.

The document is also important to the more recent history of modern New Zealand. The scroll once belonged to Sibylla Maude, or "Nurse Maude," a late-19th and early 20th century figure famous in New Zealand for her work on public health, according to the university statement.

"We are unclear how her family acquired it, although the family believed in 1918 that they had owned it since the Middle Ages," Jones said in the statement.

The university bought the roll from Maude in the waning months of World War I in an effort to promote New Zealand's identity as a British colony, according to the statement. In the 1970s, the roll was "hidden away" out of embarrassment over that same colonial history. Now, it's the project of students at the university to complete its translation from Latin so that it can be made available for exploration by the public.

By the end of 2018, according the statement, the full, translated roll should be available online.