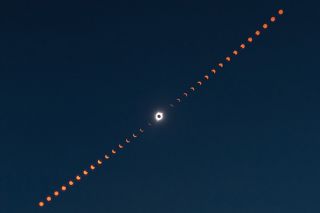 This composite image shows the progression of a total solar eclipse over Madras, Oregon, on Aug. 21, 2017.
(Image: © NASA/Aubrey Gemignani)

When the moon's shadow zipped across the United States during the Great American Solar Eclipse this past August, the shadow traveled so fast it created waves in Earth's upper atmosphere, a new study finds.

During a solar eclipse, the moon passes between the sun and Earth, casting its shadow in a narrow path across parts of the planet. Since the 1970s, researchers have suspected that the moon's shadow, which travels at supersonic speeds during a solar eclipse, could create waves in the ionosphere— a part of Earth's upper atmosphere that has electronically charged particles.

But they hadn't been able to prove it until now, the researchers told Live Science. [Photos: 2017 Great American Solar Eclipse]

Researchers suspected that the moon's shadow could "make waves" because whenthe moon travels between the sun and Earth, its shadow blocks the sun's energy, rapidly cooling the area beneath it. But because the shadow moves so quickly, anything in its wake is swiftly reheated. This sudden temperature change was thought to generate waves in "the atmosphere at altitudes where the ozone layer and water vapor efficiently convert solar [ultraviolet] radiation to heat," the researchers wrote in the study.

To investigate, Zhang and his colleagues used a dense network of about 2,000 sensors across North America that were receiving signals from satellites, known as the global navigation satellite system (GNSS). There were GNSS sensors "in the entire eclipse totality," and in affected regions over the entire continental U.S., Zhang told Live Science in an email.

These sensors can take incredibly accurate measurements. By analyzing data collected by the sensors, researchers can determine the total electron content (TEC) in the column stretching from the sensors to the satellites, which are located about 12,000 miles (20,000 kilometers) above Earth. These sensors can measure differentials in TEC, allowing the scientists to "detect very fine ionospheric disturbances," Zhang said.

During the total solar eclipse on Aug. 21, the sensors collected data on electron movement in the upper atmosphere. In effect, they were looking for bow waves — just like the waves that form in the water at the bow, or front, of a moving ship. The outer limit of the impact region can have a bow-shaped front shock, Zhang said.

The researchers also looked for stern waves, named after the rear part of a boat that also makes waves as it moves through water. "Similar bow waves, including stern waves, occur also when airplanes travel through the air at the speed of sound," said Zhang, who worked with his colleagues at Haystack Observatory and the University of Tromso, in Norway, to do this study.

Their analysis revealed that the moon's shadow created bow waves with front shocks, as well as stern waves, he said. The waves were large — at least 10 degrees longitude by 10 degrees latitude.

They moved mostly along the path of totality at almost 670 mph (300 meters per second), and lasted for about 1 hour, Zhang added.

These waves aren't dangerous, he noted. "It is an object of mainly scientific interests," Zhang said.

Previously, a 2011 study claimed to have detected 55 bow waves and stern waves, but this was based on limited coverage over East Asia during an eclipse on July 22, 2009, the researchers noted.

The story was published online Dec. 4 in the journal Geophysical Research Letters.