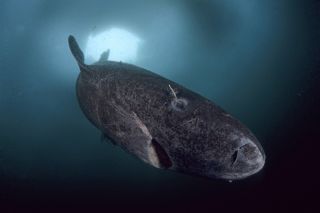 Headlines circulating on the internet today (Dec. 14) breathlessly described the discovery of a 512-year-old shark — but they're a little off the mark.

The creature in question — a Greenland shark — does, in fact, live to be several centuries old, according to a study that was published in August 2016 in the journal Science, and which was referenced in the news coverage.

But the researchers' analysis of 28 female Greenland sharks did not identify one of them as over 500 years old. Eye tissue analysis presented a probability range suggesting that the sharks were at least 272 years old, and could potentially be as much as 512 years old, Live Science previously reported. [Extreme Life on Earth: 8 Bizarre Creatures]

Greenland sharks (Somniosus microcephalus) are native to the Arctic and North Atlantic, and can grow to be up to 24 feet (7 meters) long and weigh up to 2,645 pounds (1,200 kilograms), according to the Greenland Shark and Elasmobranch Education and Research Group (GEERG). They are slow-moving fish, cruising at about 1 foot per second (0.3 meters/second), and reaching depths of 9,101 feet (2,774 m), GEERG reported.

For some shark species, scientists use bony structures such as calcified vertebrae to track their age, reading rings that form in the hardened tissue as the shark ages. But Greenland sharks are "soft sharks" whose vertebrae don't harden enough to form telltale age markers, so scientists needed a new method to determine how old the sharks were, Julius Nielsen, author of the 2016 study about the sharks, told Live Science that year.

The tissue gave them a range for the sharks' ages — they were at least 272 years old, and as much as 512 years old. The two biggest sharks — and probably the oldest — were estimated to be 335 and 392 years old, respectively. And the midpoint of the range — "the most likely single-year age in the 272- to 512-year range" — was 390 years, Nielsen told Live Science. [Photos: The World's Oldest Living Things]

"It's important to keep in mind there's some uncertainty with this estimate," Nielsen said. "But even the lowest part of the age range — at least 272 years — still makes Greenland sharks the longest-living vertebrate known to science."

As long-lived as they may be, Greenland sharks don't even come close to the longevity of hydra — freshwater polyps. These unassuming-looking invertebrates continuously regenerate their own cells, and are thought to be able to live forever under the right conditions.

Creatures that swim the ocean depths are notoriously difficult to observe in their natural habitat, and there is still much to be learned about many species that have been known to science for decades — and Greenland sharks are no exception, Nielsen told Live Science in 2016.

"Almost all of their biology is a mystery," he said.