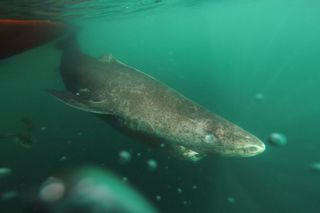 A newly tagged Greenland shark returns to the deep and cold waters of the Uummannaq Fjord in western Greenland.
(Image: © Julius Nielsen)

Greenland sharks are slow. They swim through the cold waters of the Arctic and the North Atlantic at a sluggish pace that has earned them the nickname "sleeper sharks." Seal parts have been found in their bellies, but the sharks move so slowly that experts have suggested that the seals must have been asleep or already dead when the sharks ate them.

They're also not too swift when it comes to growing, eking out a mere 0.4 inches (1 centimeter) per year, studies have found. Researchers suspected that Greenland sharks' exceptionally slow growth meant that they lived a long time, but they had no idea just how long that might be. That is, until now.

A new study provides the first estimates for Greenland shark longevity, and shows that these slowpokes of the sea stick around a very long time — at least 272 years, and perhaps as long as 390 years on average, making them longer-lived than any other vertebrate in the world. [In Photos: Seeing Sharks Up Close]

Finding the age of any type of shark isn't easy, and the Greenland shark (Somniosus microcephalus) is especially challenging, according to study co-author Julius Nielsen, a marine biologist and doctoral candidate at the University of Copenhagen.

Nielsen told Live Science that scientists use bony structures in sharks to track their age — and there aren't many. Some species of sharks have calcified vertebrae or fin spines, and these contain stripes that can be used to calculate how old a shark is, similar to counting growth rings in trees.

Greenland sharks, on the other hand, are "very soft sharks," Nielsen said, and they don't have any bony structures at all.

"Something new had to be taken into consideration to solve this mystery," he said.

The solution involved a technique that had been used to find the age of some whale species: peering into the lenses of the sharks' eyes. Nielsen told Live Science that the transparent tissue in the eye lens is metabolically inactive and that new layers are added throughout the shark's lifetime.

"If you remove all layers, in the end, you come to the layer from when the shark was a baby. Then, you analyze that tissue," Nielsen explained. The researchers investigated eye lenses belonging to 28 female sharks measuring between 2.7 and 16.5 feet (0.8 to 5 meters) long. The sharks were captured in the North Atlantic as bycatch.

Although the scientists couldn't count the individual layers that built up over time in the eye lens, they were able to estimate the sharks' ages by using radiocarbon dating — measuring the amounts of a particular carbon isotope absorbed by living tissue — in the innermost (and oldest) part of the lens.

This was possible, in part, due to atmospheric thermonuclear weapons tests conducted during the 1960s, which released massive amounts of radiocarbon that were then absorbed by organisms in ocean ecosystems. Sharks that showed evidence of elevated radiocarbon in the nucleus of their eye tissue were therefore born after the so-called "bomb pulse," and were younger than 50 years old, while sharks with lower radiocarbon levels were born prior to that, and were at least 50 years old or older, the study authors wrote.

The scientists then calculated an age range for the older sharks based on their size, and on prior data about Greenland sharks' size at birth and growth rates in fish.

Their analysis of the sharks suggested — with a probability of about 95 percent — that the sharks were at least 272 years old, and could be as much as 512 years old, with 390 years as the most likely average life span, according to Nielsen.

For the two biggest sharks — which measured 16.2 feet and 16.5 feet (4.9 and 5 meters) — the study authors estimated ages of about 335 and 392 years old. Female sharks were already known to be sexually mature if they measured at least 13.1 feet (4 meters) in length, and based on the new data, the researchers were able to calculate that Greenland sharks reach sexual maturity when they are at least 156 years old.  [8 Weird Facts About Sharks]

"It's important to keep in mind there's some uncertainty with this estimate," Nielsen said. "But even the lowest part of the age range — at least 272 years — still makes Greenland sharks the longest-living vertebrate known to science."

Other long-lived vertebrates have been known to make it past their first century, but those animals still fall far short of the Greenland shark's length of life. For example, the Galápagos tortoise has an average life span of 150 years, box turtles live an average of 120 years and swans can live to be 100 years old.

But when it comes to longevity, all of these long-lived animals with backbones — yes, even the Greenland shark — can't hold a candle to colonies of corals, some of which are estimated to be more than 4,000 years old.

Greenland sharks' life span has been one of the biggest biological puzzles for scientists to unravel, Nielsen told Live Science. However, he added that he still has a long, slow road to travel before he runs out of new things to learn about these sharks and their slow-motion lives.

"Almost everything about their biology is a mystery. Big animals that live in deep waters are difficult to study," Nielsen said. "If you see a Greenland shark in the wild, you're seeing it for about 10 seconds — it's such a small glimpse. We've hardly seen anything. There's plenty for me to do in the future."

The findings were published online today (Aug. 11) in the journal Science.

Editor's note: This article was updated to clarify the techniques used in the study and to include more information about the discovery.