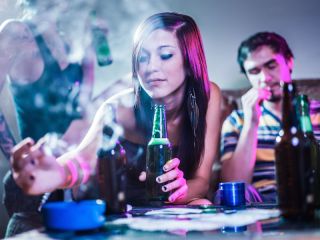 Teen use of many drugs is on the decline, but U.S. officials remain concerned about teen marijuana use — which actually increased in the past year — and vaping, which is common, according to a new survey.

The government-backed annual survey, called Monitoring the Future, gathered data from more than 43,000 U.S. students in the eighth, 10th and 12th grades.

This year's findings included a slight increase in the rate of teen marijuana use: for all three grades combined, nearly 24 percent of the students surveyed reported using marijuana in the past year, up from 22.6 percent in 2016. But rates of teen marijuana use in 2017 are about the same as they were in 2015 — meaning that overall, rates have remained stable in recent years.

Part of the reason for this year's increase in teen marijuana use may be that today's teens perceive the drug as less risky than they did a generation ago, the researchers said. In 2017, just 29 percent of high school seniors said there was a "great risk" of harm in using marijuana regularly, down from 78 percent in 1991.

"Historically, marijuana use has gone up as adolescents see less risk of harm in using it," Richard Miech, principal investigator of the survey and a professor at the University of Michigan, said in a statement. "We’ve found that the risk adolescents see in marijuana use has been steadily going down for years to the point that it is now at the lowest level we’ve seen in four decades." [7 Ways Marijuana May Affect the Brain]

Dr. Nora Volkow, director of the National Institute on Drug Abuse (NIDA), said marijuana use among teens is concerning, in part because of its effect on education. Teens "are in school and they are supposed to be learning," Volkow said in a news conference today (Dec. 14). But regular marijuana use has been linked with poorer educational outcomes, such as a reduced chance of graduating, according to NIDA.

The survey also found that use of electronic vaporizers, or "vaping," is popular among teens. Nearly 1 in 3 high school seniors (28 percent) said they used some kind of vaping device in the past year. And when asked what they were vaping, 52 percent said "just flavorings," 33 percent said "nicotine" and 11 percent said "marijuana" or "hash oil," the survey found. (However, some research suggests that many teens may not actually know what is in their vaping device, according to NIDA.)

"We are especially concerned because the survey shows that some of the teens using these devices are first-time nicotine users," Volkow said. "Recent research suggests that some of them could move on to regular cigarette smoking, so it is critical that we intervene with evidence-based efforts to prevent youth from using these products."

Despite declines in teen use of many drugs, the researchers said that people should not be complacent about tackling teen drug use, as every new generation is vulnerable. "They don’t know about why they shouldn’t use drugs any more than they know how to read, unless we teach them again," said Lloyd Johnston, a professor at the University of Michigan and previous director of the survey, during the press conference.