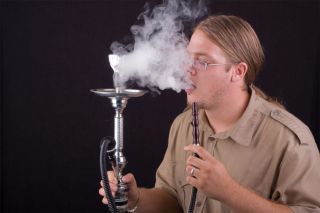 Although cigarette smoking isn't nearly as popular with teens in the United States as it was a decade ago, that doesn't mean teens don't smoke. A new study finds that a more exotic form of tobacco use, hookah smoking, is on the rise among U.S. teens.

In fact, 18 percent of high-school seniors surveyed said they had smoked a hookah in the past year, according to the study. A hookah is a water pipe that uses charcoal to heat up a wet tobacco product called shisha.

The new finding is in line with a recent report by the Centers for Disease Control and Prevention that found that while the overall use of tobacco products in the United States decreased between 2000 and 2011, there was an increase in the use of noncigarette tobacco products, including hookah tobacco.

"Cigarette use has decreased by 33 percent in the past decade in the U.S., while the use of alternative tobacco products, such as hookahs, has increased [by] an alarming 123 percent," said Dr. Michael Weitzman, a professor of pediatrics and environmental medicine at New York University and co-author of the new study.

Weitzman said this trend is especially worrisome because teenagers may think hookahs are a safe alternative to cigarettes. However, evidence suggests that hookahs may be even more damaging to health than cigarettes are, he said.

Lung cancer, respiratory illness and periodontal disease are some of the health risks associated with hookah smoking, according to the CDC.

The appeal of hookahs

Although hookah smoking and cigarette smoking cause similar health woes, they differ in important ways, said Joseph Palamar, an assistant professor of population health at NYU and co-author of the study.

For one thing, hookahs are frequently smoked in hookah bars and lounges, where smokers can order their preferred flavor of tobacco along with their favorite cocktail or juice.

Some researchers are worried that hookah smoking will become a regular teen activity, Palamar said. "Now, something called hookah pens, which are similar to e-cigarettes, are gaining popularity," he said. "While not all hookah pens contain nicotine, this new delivery method might normalize hookah use in everyday settings, and bring use to a whole new level."

Hookah pens come in a wide variety of colors and patterns that may appeal to both young people and adults, and could even spark the curiosity of nonsmokers, Palamar said. For people curious about smoking, but who would rather not smell like smoke, hookahs provide a dangerously sneaky alternative.

"Unlike cigarettes, hookah comes in a variety of flavors and is less likely to leave users smelling like cigarette smoke after use," Palamar said. "This may allow some users to better conceal their use from their parents or peers."

Being able to smoke tobacco without being labeled as a smoker is something that worries researchers. The stigma of cigarette smoking has played a large part in the recent decrease in smoking rates, the researchers said. However, the normalization of hookah use could result in a "potential epidemic of a lethal habit," Weitzman said.

This trend would most likely affect upper- and middle-class adolescents, the researchers said.

The researchers also found that students who smoked cigarettes — and those who used alcohol, marijuana or other illicit substances — were more likely to use hookah.

The study will be published in the August issue of the journal Pediatrics.