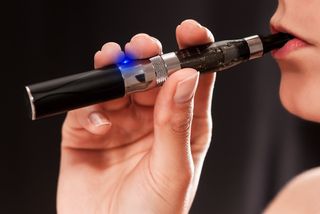 Nicotine inhalers, which are devices similar to electronic cigarettes, have existed for years, but they were just not cool enough to catch on, researchers say.

Listed among the treatments used for helping smokers quit, nicotine inhalers were approved by the Food and Drug Administration (FDA) in 1997. The devices deliver nicotine to the mouth when the smoker puffs at the plastic mouthpiece that looks like an old-fashioned cigarette holder.

"It's remarkable how these products have been around for over 15 years now, and physicians and consumers are not aware of them," said Dr. Michael Steinberg, an internist at Rutgers, The State University of New Jersey, who runs a tobacco treatment program. [Kick the Habit: 10 Scientific Quit-Smoking Tips]

E-cigarettes work by vaporizing a nicotine-containing solution. Studies on the effectiveness of these devices in helping smokers quit have yielded mixed results. Nevertheless, the devices seem to have gained increasing popularity among smokers who wish to quit, or are merely looking for a replacement to traditional cigarettes, and some have claimed they are particularly appealing to young people.

To compare how users perceive nicotine inhalers compared with the fancier e-cigarettes, Steinberg and colleagues gave 40 smokers both devices to use, for three days each, and asked them to report their experience.

The results showed the e-cigarette received higher ratings for helpfulness, acceptability and "coolness," according to the study, published in the Journal of General Internal Medicine in May.

"E-cigarettes consistently scored higher than the inhaler in things like satisfaction, psychological reward, acceptability and cooler image," Steinberg said. "Despite the lack of evidence regarding the safety and effectiveness of e-cigarettes, over three-quarter of participants said they would use e-cigarettes to help them quit smoking, compared to less than one-quarter for the product that's FDA-approved to do that."

Some of the differences between the devices may due to their marketing, the researchers said. E-cigarettes are widely advertised. Inhalers on the other hand, haven't had the same type of marketing effort, Steinberg said.

"We can learn to take some of this information as to what makes e-cigarettes appealing, and if we can apply that to the safe, proven treatments that we have, that would be wonderful," he told Live Science.

But aside from being viewed as less cool, another reason that might explain why inhalers haven't been used as much as e-cigarettes is that people need a prescription to get an inhaler.

"It certainly could be a barrier to access," Steinberg said. However, "in our studies we gave the products to folks free of charge, so their access is equal. And how much the participants liked the e-cigarettes over the inhalers is dramatic."

Compared to inhalers, e-cigarettes are heavier, and the vapor they produce better mimics the smoking experience. However, as the devices are not regulated, the amount of nicotine delivered by e-cigarettes varies widely, Steinberg said. Some e-cigarettes contain no nicotine at all and some can deliver nicotine at levels two or three times greater than what is delivered in other nicotine replacement therapies.

"You can buy e-cigarettes and have no idea how much nicotine you're getting into your body," Steinberg said.

"If e-cigarettes are what's going to be dominating the tobacco market in decades to come, we need to be able to demonstrate that even though these are appealing and popular products, they are safe to use," Steinberg said. "If they can be regulated so they are safe products, we can take advantage of their popularity and their appeal and use them as a harm-reduction nicotine-delivering device."