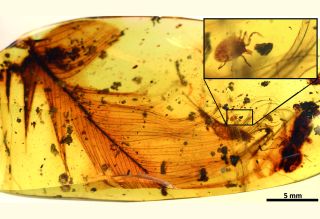 Preserved inside a piece of amber, a tick clinging to a dinosaur feather provides the first direct evidence that these bloodsuckers parasitized dinosaurs 99 million years ago.

Scientists have speculated that feathered dinosaurs likely hosted parasitic pests, as birds do today. And ticks found in amber closely resemble modern ticks, suggesting that they had similar parasitic habits. But there were no fossils that directly connected dinosaurs to the tiny arthropods that may have fed on them.

Now, scientists are reporting in a new study proof of one such relationship — an immature tick holding fast to a feather, frozen in time millions of years ago inside a tiny resin tomb. This striking find was described alongside other examples of ticks in this hardened tree sap, which provided additional evidence that these insects feasted on dinosaurs. [In Photos: Amber Preserves Cretaceous Lizards]

The feather-gripping tick and its fellows were detected inside four polished pieces of Burmese amber, found in the Southeast Asian country of Myanmar. Private collectors who acquired the amber noticed the pieces held particles that could be of scientific interest, and so they shared them with paleontologists, study co-author and paleobiologist Ricardo Pérez-de la Fuente, a research fellow at the Oxford University Museum of Natural History in England, told Live Science.

It wasn't until the researchers examined the amber pieces more closely that they realized a "particle" in one of them was a juvenile tick, or nymph, entangled with a dinosaur feather. Such a discovery — physically linking a parasite to its host — is exceptionally rare in the fossil record, Pérez-de la Fuente said.

The tick, identified as Cornupalpatum burmanicum, belongs to a group commonly known today as hard ticks, which have a shield-like structure on their backs that protects them from being crushed by their hosts. During the immature nymph stage, these ticks are "voracious blood feeders," which suggested to the researchers that the feather in the tick's grasp came from its meal ticket, Pérez-de la Fuente said.

And because the amber dates to the middle of the Cretaceous period, that rules out the possibility that the feather belonged to a modern bird, which appeared much later in the evolution of theropod dinosaurs, he added.

"We're always seeking direct evidence, but that's very scarce. That's why our finding is so important — this is providing the first direct evidence that ticks parasitized feathered dinosaurs," he said.

"We can see the tiniest details — hairs, even teeth preserved in the mouthparts of [the] tick, the structures that penetrate the tissues and allow the tick to anchor to the skin of the host," he said.

Amber is also unparalleled at capturing portions of the environment in an ancient ecosystem, allowing scientists to see species interactions as they appeared in life. In this case — a tick clutching a feather — that record would doubtless have been lost had the feather been preserved as a rock impression, Pérez-de la Fuente said.

And as ticks and other types of parasites spend most of their life riding around on their hosts' bodies, they were less likely than other insects such as ants and termites to be trapped in ancient resin and entombed in amber — which makes this find even more extraordinary, Pérez-de la Fuente said.

Other amber pieces described in the study held previously unidentified ticks that the scientists dubbed Deinocroton draculi — "Dracula's terrible tick" —one of which was engorged with blood to about eight times its normal size. Though these ticks are isolated from their hosts, the researchers detected minute hairs attached to the ticks' bodies belonging to beetle larvae that are often found in birds' nests, where they feed on shed feathers. This suggests that the ticks lived alongside the beetles, perhaps in a dinosaur's nest, and that they likely also fed on feathered dinosaurs, the study authors reported.

Additionally, these findings hint at how some types of communicable diseases may have spread among feathered dinosaurs, the researchers wrote in the study. Ticks today are a common disease vector for mammals, birds and reptiles, and it is likely that millions of years ago, ticks could also have carried disease-causing bacteria between the hosts that they parasitized, the scientists concluded.

The findings were published online today (Dec. 12) in the journal Nature Communications.