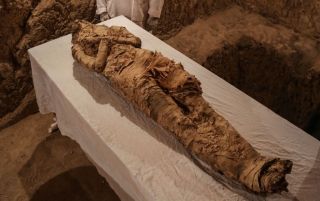 An ancient mummy from the 18th dynasty (1550 B.C. to 1292 B.C.) was one of many archaeological findings in a tomb located in Luxor, Egypt.
(Image: © Ibrahim Ramadan/Anadolu Agency/Getty Images)

Archaeologists have excavated two ancient tombs in Luxor, Egypt, that haven't seen the light of day in about 3,500 years, according to the country's antiquities ministry.

The tombs are filled with archaeological treasures, including a mummy wrapped in linen, as well as bright wall paintings and a small, painted wooden mask.

The Egyptian government hopes that the discoveries will help revive the country's tourism industry, which has fallen due to the extremist attacks and political turmoil following the 2011 Arab Spring, Antiquities Minister Khaled al-Anani said, according to the Associated Press. [In Photos: Ancient Tomb Full of Mummies Discovered in Luxor]

The antiquities ministry has known about both tombs since the 1990s, when German archaeologist Frederica Kampp found them and gave each a number ("Kampp 161" and "Kampp 150"), Mostafa Waziri, secretary-general of the Supreme Council of Antiquities and head of the Egyptian excavation mission, said in a Dec. 9 statement.

However, archaeologists never excavated the "Kampp 161" tomb. Kampp began excavating the "Kampp 150" tomb but stopped when she reached the entrance, meaning she never entered it, the antiquities ministry said.

Both tombs are located in the Draa Abul Naga necropolis on Luxor's west bank. Each has several chambers within it, the antiquities ministry said.

The new archaeological excavations revealed that Kampp 161 is lined with stone and mud-brick walls. It has a 20-foot-deep (6 meters) burial shaft and four side chambers.

Based on wall paintings, engravings and inscriptions found in Kampp 161, it's likely that the tomb dates to the era between the reign of Pharaoh Amenhotep II and Pharaoh Thutmose IV, who ruled during the 18th dynasty, the archaeologists said. However, the name of the deceased is unknown.

Whoever this person was, he got a grand burial. The tomb has two feast scenes, one of which depicts a man (likely the deceased's brother) giving offerings and flowers to the deceased and his wife. A second scene, painted below the first, shows a number of guests standing in four rows.

Inside Kampp 161, the archaeologists found wooden artifacts, including a large mask that was originally part of a coffin honoring Osiris (the ancient Egyptian god of afterlife and rebirth); a small, painted mask; a fragment of a gilded wooden mask; and the lower part of an Osiris-shaped coffin decorated with a scene of the goddess Isis lifting up her hands, the antiquities ministry said. (Isis is the goddess that resurrected her dead husband, the king Osiris, according to ancient Egyptian mythology.)

The other tomb (Kampp 150) held a mummy — likely a top official or other powerful person — who was wrapped in linen and laid to rest in a long chamber.

The identity of the mummified person is unknown, but archaeologists have two guesses about his name: It could be "Djehuty Mes," a name engraved on one of the walls, or "Maati," a name inscribed alongside the name "Mehi," likely his wife, on 50 clay funerary cones discovered within the tomb. [Photos: Peaceful Funerary Garden Honored Egypt's Dead]

A ceiling carving of a symbol related to King Thutmose I indicates that the tomb dates to the end of the 17th dynasty and the beginning of the 18th dynasty, the antiquities ministry said.

Archaeologists found the burial of a woman named "Isis Nefret," who is likely the deceased's mother, inside the tomb. The woman's yellow-painted coffin had 36 funerary figurines, which are called ushabti. Ushabti figurines were thought to do work for the deceased in the afterlife, Live Science previously reported. One special ushabti — standing 24 inches (60 centimeters) tall and painted white, red, green, blue, yellow and black — depicts the woman in the form of Osiris.

A painted scene in the tomb shows a seated man offering food to four oxen, one of which is kneeling in front of the seated man, the antiquities ministry said.

The artifacts within the tomb include 100 funerary cones; painted wooden funerary masks; a collection of 450 statues carved in different materials, such as clay, wood and faience (glazed pottery); and a small box in the shape of a wooden coffin with a lid, which likely held one of the ushabti figurines.

The excavation is one of many conducted this past year in Luxor. In September, archaeologists announced that they had found an ancient goldsmith's tomb that was filled with mummies in Luxor, Live Science previously reported.