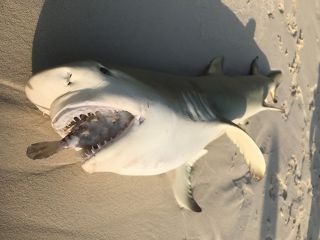 There was no winner in a deadly clash between a shark and a porcupine fish.
(Image: © Lauren Arthur )

A hungry shark that tried to swallow a spiny porcupine fish suffocated on its supper, as the prickly mouthful got hooked halfway into the shark's gullet and blocked the predator's gills.

The unfortunate porcupine fish did not survive the encounter, either.

The deadly clash took place on April 21 in tropical waters near the Maldives, an island country in the Indian Ocean, and the aftermath was observed and photographed by independent marine biologist Lauren Arthur after the animals' remains washed up on the beach. [Beastly Feasts: Amazing Photos of Animals and Their Prey]

Young lemon sharks are frequent visitors to the shallow lagoon in Baa Atoll, and the waters are likewise home to a large population of porcupine fish, which are also called balloonfish or spiny puffers for their body-inflating abilities. But this particular scene — a dead shark with an inflated, barbed fish partly protruding from the predator's gaping jaws — was something that Arthur had never come across before, she told Live Science in an email.

Gardeners at the Amilla Fushi resort in the Maldives' Baa Atoll contacted Arthur — who also works at the resort — when they saw what looked like a shark thrashing around close to the shore. But by the time Arthur arrived, the shark had already expired, she explained. She identified the animals as a lemon shark (Negaprion brevirostris) and a porcupine puffer fish in the Diodontidae family, she wrote in the email.

When puffer fish are threatened, they inflate their bodies by quickly gulping water into their stomachs, blowing up to several times their uninflated size. What likely happened was that the shark tried to swallow the fish, which then promptly inflated, hooking onto the inside of the shark's throat and mouth with its sharp spines, Arthur explained.

Sharks are capable of vomiting up indigestible items or excess food, as researchers reported in 2011 in the journal Florida Scientist. In extreme cases, sharks can even briefly expel their own stomachs, known as "eversion," according to a study published in 2005 in the Journal of the Marine Biological Association of the United Kingdom. That study's authors even captured evidence of this literally stomach-turning behavior on video, in which a free-swimming shark's stomach pops out of its mouth and then snaps back inside again.

Stomach eversion in a free-living shark from Juerg Brunnschweiler on Vimeo.

But in the incident with the porcupine fish, when the shark tried to spit the fish out, the backward-pointing barbs dug in deeper, lodging the bloated fish inside the shark, Arthur told Live Science. The puffer fish's expanded body then blocked the flow of water through the shark's gill chamber, and caused the shark to suffocate, Arthur said.

Lemon sharks can grow longer than 10 feet (3 meters), weighing as much as 551 pounds (250 kilograms), according to the International Union for Conservation of Nature. But this individual measured only about 3.6 feet (1 m) long, Arthur noted.

Whales and dolphins have met similarly unpleasant ends after gulping down what looked like easy meals. In 2015, scientists reported that two long-finned pilot whales died while feeding on flatfish that the whales inadvertently sucked into their blowholes. And in May of this year, researchers described the choking death of a bottlenose dolphin that suffocated on a mouthful of octopus.

Fascinating though this recent encounter between shark and puffer fish was, Arthur didn't have equipment on hand to further analyze the unlucky shark nor to remove the prey from the shark's maw, and there was nothing more that could be done to study the two combatants, she wrote in the email.

"So we buried the shark on the island," Arthur said.