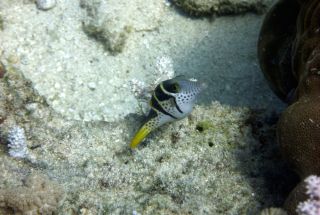 Pufferfish are famous for puffing up, but the taxing inflation may put them at risk of later predation.
(Image: © Georgia McGee)

Pufferfish can balloon into a spikey sphere within moments of sensing a nearby threat, and while it may seem like these creatures hold their breath as they inflate, they can actually breathe as they puff up. But this trick may actually tire pufferfish out and put them at risk of being eaten once they've deflated, a new study finds.

Pufferfish, also known as blowfish, can quickly expand by gulping water into their elastic stomachs. In the movie "Finding Nemo," the pufferfish Bloat inflates in an instant and awkwardly floats away like a beach ball, but it turns out that the fishes' puff has nothing to do with holding in air, the researchers found.

"We were intrigued by previous studies that suggested the pufferfishes hold their breath while inflated, presumably to keep the ingested water in the stomach," said Georgia McGee, who did the research as a marine biology undergraduate at James Cook University in Queensland, Australia. "If this was true, we thought it likely that pufferfish inflation would have a limited duration, due to a lack of oxygen getting to vital body organs." [Photos: The Freakiest-Looking Fish]

The scientists caught eight black-saddled pufferfish (Canthigaster valentini) in Australia's Great Barrier Reef, and placed them in sealed tanks. The researchers stimulated the fish by gently suctioning, which caused them to puff up to about four times their normal size. Then, they measured the amount of oxygen in the tank, to check the rate of oxygen consumption — a gauge of whether the fish were holding their breath.

Pufferfish, the researchers learned, can breathe just fine while inflated. "This species actually has an excellent capacity for oxygen uptake while maintaining an inflated state," McGee told Live Science in an email.

Moreover, the fish breathe with their gills when puffed up, which means they can breathe as they always do, even when they inflate to the size of a football.

But inflation comes at a cost, and can increase the fish's oxygen uptake to five times that of resting levels, McGee said. It then takes an average of 5.6 hours before the fish can return to typical metabolic levels. A tired fish is a vulnerable one, and it's likely that pufferfish — known for their deadly poison — may be easier targets for predators after they deflate.

"It is kind of like a human athletics race; once we have finished the race, we need some time to recover before we can perform to the same level again," McGee said.

The findings may help people understand more about the fascinating behaviors of the pufferfish.

"It's a neat little study," said Andrew Gracey, an associate professor of marine biology at the University of Southern California who was not involved in the research. "It really addressed something that the public might have perceived as being a phenomenon — that pufferfish can hold their breath."

And it's no surprise that puffing up is a taxing exercise for pufferfish, he said.

"They need some powerful buccal contractions to pull in that much water, and then some very strong esophageal muscles to hold it in," Gracey said. "If it's taking them several hours to recover, it's not a response that they would have probably evolved to use every hour of the day."

The study was published online Tuesday (Dec. 2) in the journal Biology Letters.