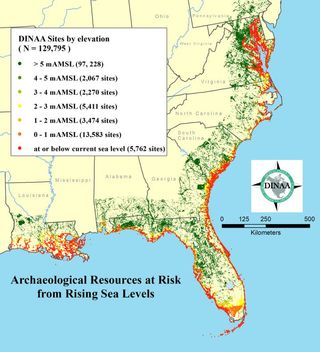 Sea-level rise this century may threaten Jamestown in Virginia, the first permanent English settlement in the Americas; the Kennedy Space Center in Florida, which launches all of NASA's human spaceflight missions; and the Cape Hatteras Lighthouse in North Carolina, the tallest brick lighthouse in the United States, a new study finds.

These iconic locales are some of the more than 13,000 archaeological and historical sites on the Atlantic and Gulf coasts of the southeastern United States that rising sea levels will endanger this century, researchers in the new study said.

Global warming may lead sea levels to rise by about 3.3 feet (1 meter) in the next century and by 16.4 feet (5 m) or more in the centuries afterward, according to research from the Intergovernmental Panel on Climate Change and others. These rising sea levels could have severe effects, as more than 40 percent of all people worldwide currently live within a 60-mile (100 kilometers) distance from a coastline, many in low-lying areas vulnerable to sea-level rise, according to reports from the United Nations and others.

Archaeologists in the new study wanted to see what effect rising sea levels might have on archaeological and historical sites. For example, in 1999, the Cape Hatteras Lighthouse was relocated about 2,900 feet (885 m) to protect it from the encroaching sea.

The researchers analyzed data from the Digital Index of North American Archaeology (DINAA), which collects archaeological and historical data sets developed over the past century from multiple sources.

"DINAA allows us to examine where people were living in North America over the entire 15,000-year record of human settlement," said study lead author David Anderson, an archaeologist at the University of Tennessee, Knoxville.

If projected trends continue, there could be a 3.3-foot (1 m) rise in sea level by 2100, submerging thousands of recorded archaeological and historical sites in the southeastern United States alone, the scientists predicted.

"We will lose much of the record of the last several thousand years of human occupation in coastal areas, where a great deal of history and settlement has occurred," Anderson told Live Science.

The study found that only relatively minor increases in seal level, on the order of 1 to 3 m (3 to 10 feet), were necessary to threaten these iconic places. Other important cultural landmarks at risk include Charleston, South Carolina, and St. Augustine, Florida, the oldest continuously occupied European settlement in the Americas. In addition, at archaeological sites where indigenous inhabitants, early settlers, and enslaved and later freed peoples once lived, rising seas pose a risk of damage or disappearance.

The 13,000 or so sites identified by the study are only a tiny fraction of the ones known to science, "much less [those] thoroughly examined by archaeologists," Anderson said. Many other sites that archaeologists have not yet had a chance to explore will also be lost, the researchers added.

"What was surprising was the vast numbers of archaeological sites that are threatened when the data are examined collectively," Anderson said. "When you develop tools showing how much will be lost at regional and continental scales, it shows the scale of the challenge and the need to start seriously planning for it."

In the future, more states can participate in DINAA so that informed decisions can be made "about what to try to save, and how," Anderson said.

This isn't the first time scientists have suggested that climate change could threaten important U.S. landmarks. In 2014, a study found that rising sea levels pose a risk to cultural landmarks such as the Statue of Liberty. Scientists detailed the findings of the new study online today in the journal PLOS ONE.