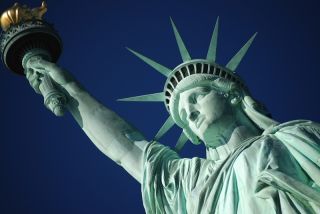 If current trends in global warming continue unmitigated, some of the world's most well-known and historically significant cultural landmarks — including the Statue of Liberty in New York City, the Tower of London in the United Kingdom, and the archaeological sites of Pompeii in Italy — could be destroyed by rising global sea levels over the next 2,000 years, according to new research.

A new study examining the long-term effects of sea-level rise on the 720 spots around the world that have been designated UNESCO World Heritage Sites found that roughly 20 percent of them could be ruined if temperatures rise 5.4 degrees Fahrenheit (3 degrees Celsius) above pre-industrial levels over the next two millennia, said study lead author Ben Marzeion, an assistant professor at the Institute of Meteorology and Geophysics at the University of Innsbruck in Austria.

"I didn't expect that so many of the UNESCO World Heritage Sites would be affected," Marzeion told Live Science. "I knew that many of the sites are close to the sea, but I didn't expect to have such high numbers. If you asked me when I started doing this, I would have said maybe 2 or 5 percent." [8 Ways Global Warming is Already Changing the World]

The findings are also worrisome because the scenario imagined in the study — that is, a temperature increase of 5.4 degrees F (3 degrees C) above pre-industrial levels — is not much more extreme than current climate change projections, the researchers said.

In order to avoid the most devastating impacts of global warming, climate scientists have warned that emissions of carbon dioxide and other greenhouse gases need to be cut in order to keep the increase in average global temperature to less than 3.6 degrees Fahrenheit (2 degrees Celsius). This recognized benchmark was set by climate negotiators in Copenhagen in 2009.

Some estimates indicate that even if countries start making efforts to reduce greenhouse gas emissions today, the 3.6 degree F threshold will still likely be surpassed by the end of the century.

"Three degrees Celsius [5.4 degrees Fahrenheit] of warming is not extraordinary," Marzeion said. "I think it's quite realistic that we're going to see that."

Sea-level rise has been a key concern for climate scientists, but making precise projections of how much, and how fast, sea levels may rise remains tricky. As water heats up, it expands and takes up more space, which causes sea levels to rise. Furthermore, rising surface temperatures trigger melting ice, particularly in the sprawling ice sheets that cover Greenland and Antarctica.

It is difficult to make accurate predictions of how much sea levels may rise, but Marzeion said it is generally thought that for every 5.4 degrees F of warming, sea levels could rise nearly 23 feet (7 meters).

Yet, global sea levels do not rise uniformly, which means different regions of the world will likely experience different impacts, the researchers said.

"If you think about Greenland at the moment, there is a lot of ice concentrated there," Marzeion said. "This mass exerts gravitational force, which means the ocean water is kind of pulled toward Greenland."

Melting ice causes a rearrangement of mass, which slightly alters the tilt of the planet's axis. This subtle shift causes the oceans to redistribute, and the changes can be uneven, which means some places will see higher-than-normal sea levels, while others may see slight decreases, the researchers said.

"After 2,000 years, the oceans would have reached a new equilibrium state and we can compute the ice loss from Greenland and Antarctica from physical models," study co-author Anders Levermann, a scientist at the Potsdam Institute for Climate Impact Research, said in a statement. "At the same time, we consider 2,000 years a short enough time to be of relevance for the cultural heritage we cherish."

The researchers used UNESCO's list of World Heritage Sites as a way to quantify locations around the world that had been deemed culturally significant and worthy of protection. The Statue of Liberty, Tower of London and Sydney Opera House, in Australia, are among the 136 cultural sites that could be impacted by sea-level rise.

"When people think about climate change, most of the time they're thinking about ecological or economic consequences," Marzeion told Live Science. "We thought it would be interesting to add another dimension to that: the cultural implications of climate change."