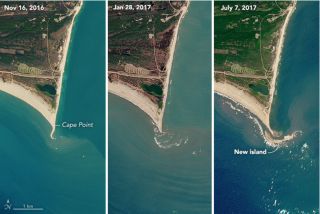 How is a barrier island born? A new series of satellite images tells the tale.

Shots taken by an instrument aboard the Landsat 8 satellite between November 2016 and July 2017 show the formation of "Shelly Island," a mile-long (1.6 kilometers) spit off the coast of Cape Hatteras National Seashore in North Carolina. The island formed rapidly, adding most of its mass between April and May 2017. (The Landsat satellites are run jointly by NASA and the U.S. Geological Survey.)

New islands are quite common on this stretch of shore, where waves and tides sculpt sand into shapes that sometimes protrude above the ocean surface. The shallow undersea expanses of sand associated with the capes are called shoals, and it is from these shoals that new barrier islands form, experts say. [See Images of a Volcanic Island Birthed in Japan]

"A likely process would be a high tide or storm-driven water elevation that piled up sediment to near the surface, and then water levels went down, exposing the shoal," Andrew Ashton, a geomorphologist at Woods Hole Oceanographic Institution in Massachusetts, told NASA' Earth Observatory, which released the new satellite images.

"Waves then continue to build the feature while also moving it about," Ashton said.

According to The Virginian-Pilot, the island got its moniker from a visiting 11-year-old, who explored the spot on Memorial Day weekend. (It was loaded with seashells.) But by June, officials were warning people not to try to get to the island, after a series of attempted visits necessitated rescues. A strong rip current makes the 50-yard (45 meters) crossing from the cape to the island dangerous, the newspaper reported.

The first snapshot taken by the Operational Land Imager (aboard Landsat 8) on Nov. 16, 2016, shows Cape Point, a prominent local fishing spot, before the island formed. By Jan. 28, 2017, the white froth of breaking waves is visible just off the point, hinting at the very shallow sand below. In the final image, taken July 7, 2017, the island is fully formed.

Barrier islands like Shelly Island are both changeable and resilient. They can be destroyed or shifted by major storms, which happened to many barrier islands during Hurricane Sandy in 2012. But when big storms steal the sand from barrier islands, it often ends up just offshore, so it's available when smaller waves return and start gently building the island back up again, Brian Romans, a sedimentary geologist at Virginia Tech, told Live Science in 2011.

This natural process can be disrupted by human activities, like the building of piers or redirection of sediment.