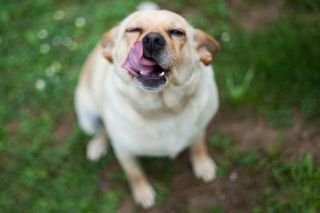 When your best friend catches you in a bad mood, does she try to console you, give you space to cool off or lick her own face in an uncontrollable slobber?

If your best friend is a dog, this third reaction may be familiar to you. Dogs lick their own mouths, noses and jowls all the time. Certain cuteness-obsessed Internet communities call it a "mlem"; some animal behavior researchers prefer to call it mouth-licking, and offer many possible explanations for the quirky canine behavior. Mouth-licking has been described as a stress-coping mechanism, a spontaneous display of arousal or a way to communicate desire to play with a certain toy or munch a certain treat.

But according to a new study by animal behavior researchers from the University of Sao Paulo, Brazil, mouth-licking may actually be one of a dog’s best tools for reading and responding to human faces — in particular, angry faces. [10 Things You Didn't Know About Dogs]

In the study, the researchers exposed 17 healthy adult dogs to a series of audio and video cues representing both positive and negative emotions. On two screens, the test dogs were shown a combination of happy and angry human faces, and happy and angry dog faces — all with accompanying audio recordings. The researchers documented any instances of mouth-licking as each pupper watched the presentation. In the end, they found that only the images of angry human faces proved to be a reliable trigger for mouth-licking.

"Mouth-licking was triggered by visual cues only," lead study author Natalia Albuquerque, a doctoral candidate in experimental psychology at the University of Sao Paulo, said in a statement. "There was also a species effect, with dogs mouth-licking more often when looking at humans than at other dogs. Most importantly, the findings indicate that this behavior is linked to the animals' perception of negative emotions."

The researchers found that the dogs responded to the angry-looking human faces with about twice as much mouth-licking as they did when they looked at happy-looking human faces, according to the study, which was published yesterday (Nov. 28) in the journal Behavioural Processes.

The impressive emotional intelligence of man’s best friend is no new story, but these findings could suggest the existence of an even more intimate behavioral evolution between dogs and humans than has been previously thought. The researchers said that they believe that this mouth-licking trait may have emerged during the process of canine domestication, and that it specifically evolved to allow canines to better communicate with human cohabitants.

"Facial communication plays a crucial role in the social cognition of several animal species and [the ability to rapidly distinguish] between positive and negative facial expressions may be fundamental to success," the authors wrote. "This is particularly relevant for domestic dogs who live in mixed species groups with humans, a species that relies extensively on visual signals for communication."

The new study closely follows the same team’s 2016 findings, which suggested that dogs can accurately match recorded speech patterns with the corresponding facial expressions. So be sure to smile the next time you see a mlem; that doggo is watching you more closely than you think.