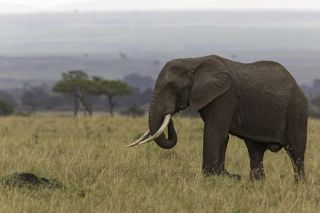 Earlier this week, the Trump administration lifted a ban on importing hunting trophies from African elephants into the United States, claiming that this policy change would benefit elephants — but then on Friday evening (Nov. 17), President Trump tweeted that he was putting that decision "on hold," pending a review of "all conservation facts."

Representatives of the U.S. Fish and Wildlife Service (FWS) had announced in a statement released on Nov. 16 that the department would begin issuing permits allowing the import of sport-hunted trophies collected from elephants killed in Zimbabwe from Jan. 21, 2016, through Dec. 31, 2018. However, a ban remains on importing elephant trophies from Tanzania, according to the statement. [7 Iconic Animals Humans Are Driving to Extinction]

President Trump's tweet walking back the ban suspension was followed by a tweet from Secretary Ryan Zinke, later that night, issuing a statement saying that "President Trump and I have talked and both believe that conservation and healthy herds are critical. As a result, in a manner compliant with all applicable laws, rules, and regulations, the issuing of permits is being put on hold as the decision is being reviewed."

In 2014, the FWS suspended the importation of elephant-hunting trophies from Zimbabwe; new information about the improved prospects of the country's elephant populations led to the decision to lift the ban, according to the FWS. The expectation was that elephant trophy hunting in Zimbabwe "will enhance the survival of the species in the wild," FWS representatives explained in a statement.

Under that initial ban reversal, hunters would have been permitted to import up to two elephant trophies from Zimbabwe each year. Trophies include raw or preserved animal parts collected by a recreational hunter "for personal use," and may include "bones, claws, hair, head, hide, hooves, horns, meat, skull, teeth, tusks or any taxidermied part, including, but not limited to, a rug or taxidermied head, shoulder or full mount," according to the FWS.

On Nov. 14, FWS officials announced the ban reversal at the African Wildlife Consultative Forum (AWCF) in Arusha, Tanzania — an event co-hosted by the government of Tanzania and the hunting organization Safari Club International (SCI). In their announcement, FWS representatives said that the agency "had made positive enhancement findings for elephants legally hunted in Zimbabwe and Zambia" between 2016 and 2018.

However, the statement on the FWS website didn't mention a change in the status of bans on elephant trophies from Zambia, and Gavin Shire, a spokesperson for the FWS, said there were no further details about Zambia "other than the finding itself," NPR reported.

A species in peril

African elephants (Loxodonta africana) are listed as "vulnerable" by the International Union for Conservation of Nature and Natural Resources (IUCN), which means a species' numbers have declined by more than 30 percent over the past decade or their habitat is fragmented, deteriorating or greatly reduced. A vulnerable species in one that faces a high risk of extinction in the wild, according to the IUCN.

An estimated 83,000 African elephants call Zimbabwe home — more than in any other country except Botswana, according to the Zimbabwe Parks and Wildlife Management Authority. Recently, the government of Zimbabwe drafted a new elephant management plan to replace older, outdated documents. The new plan is expected to enable more accurate accountings of elephant populations and to improve the tracking of revenue from sport hunting. The plan is meant to help officials figure out the potential financial benefits to conservation from elephant hunting, FWS representatives explained in the statement.

The FWS International Affairs division describes trophy hunting as a conservation tool, and the department "can allow the import of a sport-hunted elephant trophy only when the killing of the trophy animal will enhance the survival of the species."

However, some conservation organizations are skeptical of the benefits of legal big-game hunting and trophy collection for preserving and protecting elephants. In addition, there is the additional concern that the initial lifting of the trophy ban would send the wrong message to poachers about the U.S. commitment to ending trade in animal products from threatened and endangered species, M. Sanjayan, CEO of Conservation International (CI), told the CI blog "Human Nature."

"The original ban was enacted based on detailed findings on the condition of elephant populations on the ground, and it strains credulity to suggest that local science-based factors have been met to justify this change," Sanjayan said.

"This is the wrong move at the wrong time for protecting Africa's wildlife," he added.

Editor's note: This article is an updated version of the Live Science article published on Nov. 17 about the ban reversal.