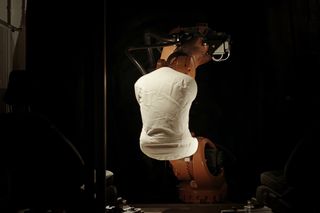 While crash-test dummies and other assembly-line machines seem to get the raw end of the deal, a different robot has a much cushier job: It tests car seats.

Meet Robutt, which makes sure the seats of your new car stay nice and comfy by simulating about 10 years' worth of wear and tear to see how the seat holds up.

Manufactured by Kuka, a German engineering company, Robutt is an industrial robot outfitted with padding in roughly the shape of a large man. The robot is being used to test out the new Ford Fiesta in the Ford's European headquarters in Germany, according to a statement from Ford. [Robo-Butt Gives New Meaning to Uncanny Valley]

Before the carmaker set Robutt to work, Ford had people enter and exit a car that had been outfitted with pressure sensors on the driver's seat. As the people sat down and stood up, the sensors recorded how much weight their butts put on the seat and how it was distributed over time. The engineers then used that information to create an average sitting and standing pattern, which Ford calls a "perch pattern," to show how a typical person might use their car's seat.

Ford engineers estimate that a typical person would enter and exit their car about 25,000 times over 10 years. So that's exactly what the engineers have Robutt do. The robot works tirelessly, simulating a typical person's perch pattern by pushing against a car seat every day for three weeks.

"Previously, we used pneumatic cylinders that simply moved up and down," Ford durability engineer Svenja Froehlich said in the statement. "With the 'Robutt,' we are now able to replicate very accurately how people really behave."

As of 2015, the average age of a car rose to 11.5 years, and about a quarter of all cars still in use were bought before the turn of the century, according to data collected by the U.S. Department of Transportation and a financial analysis company called IHS Markit, CNBC reported. As people hold onto their cars for longer than ever, Robutt's representative rear end will ensure drivers and passengers continue riding in comfort.