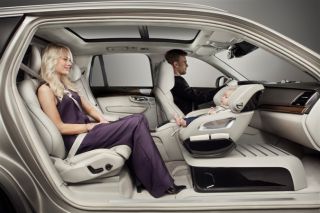 Volvo recently unveiled a new concept for a car with a change that may scare some parents: The front passenger seat is a baby car seat that swivels and then locks in place to face the rear of the car.

The seat is fixed on a platform in Volvo's XC90, and the arrangement allows a person sitting in the backseat to look at and entertain a strapped-in youngster sitting in the front.

This conceptual configuration could be safe in this particular car, as the front air bag would be switched off. But it's important to know that in the United States, it's still incredibly dangerous to put children in a rear-facing car seat in the front seat of a car because most front air bags can't be turned off, said Dr. Alisa Baer, a pediatrician, nationally certified car-seat safety expert and the co-founder of The Car Seat Lady. [9 Weird Ways Children Injure Themselves]

Volvo's new concept was unveiled for the "Excellence" edition of the company's XC90; the vehicle is essentially a seven-seat SUV that has been converted into a roomier four-seater meant to be driven by a chauffeur. The company plans to test out the cars with real passengers in 2017, Wired reported.

Clearly, the car is not meant for the average working family. But even if it were accessible to the masses, to American eyes, the setup looks slightly horrifying. Americans have had it drummed into their minds that the backseat is the safest place for a baby or child. That advice hasn't changed.

But people may not realize that the major safety concern associated with putting a rear-facing child's car seat into the front seat of a car is the presence of frontal air bags, Baer said. It's likely the new Volvo design eliminates that concern by turning off the front passenger seat airbag, she said.

In addition, since car seats are so often installed improperly, it's nice to see some "disruptive thinking" about car design, aimed at finding ways to keep children safe, said Dr. Benjamin Hoffman, the director of the Doernbecher Tom Sargent Safety Center at Oregon Health and Science University in Portland.

In the United States, children should sit in rear-facing car seats, in the back seat, up to at least age two and ideally until the child is bigger than the maximum weight or height requirements of the car seat. In a crash, the rear-facing car seat acts like a catcher's mitt fielding a fastball, cradling the child's head and neck. Rear-facing car seats are also safer for children during side-impact crashes, which are the deadliest type of crash, Baer added.

Placing a rear-facing car seat in the front seat can kill a child: If the front air bag inflates, even in a low-speed crash, the force of the airbag against the back of the car seat would be like "an elephant kicking you in the back of the head," Baer said.

In the United States, the vast majority of cars don't come with the ability to turn off a front air bag, so it's almost never safe to put a baby or child in a rear-facing front seat, Baer said. (A few two-seater cars do come with an airbag on/off switch, but not all, and the government forbids auto repair shops from simply disconnecting the electrical circuit that trips the airbag, Baer added.)

But in Europe, they do things a little differently. More cars have switches that can shut off the front air bag in the passenger seat, and as a result people more often place babies in the front seat in a rear-facing car seat, Baer said. Some car seats there also come with warning lights to remind parents to shut off the airbag, she added.

Without the risk of passenger-seat airbag deployment, the danger associated with a front-seat, rear-facing car seat goes way down, Baer said. Still, in order for Volvo's new design to be safe, all the passengers must be buckled up. In a crash, an unbuckled passenger would fly forward and become a "human missile," which could be launched at the baby, Baer said.

"The G forces in that crash will make that person weigh several thousand pounds rather than several hundred," Baer said.

Over the last few decades, safety innovations to the front passenger seat have made it as safe or even slightly safer than the backseat, at least for adults, Baer said.

Still, for little ones, the back seat is still best. The American Academy of Pediatrics recommends placing kids in the backseat until they are at least 13 years old.