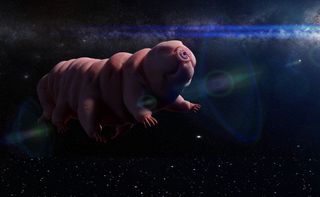 People are gearing up to spread life from our solar system out into the cosmos. But the first life-forms to make that journey won't be human beings, or even critters most folks would recognize. Instead, scientists plan to send tiny, chubby, pinch-faced tardigrades on the first living journey out past the Oort cloud (the ring of icy debris around our solar system) and into interstellar space.

Why tardigrades? Well, if you've heard anything about these eight-legged, dirt-dwelling "water bears" before, it was probably because they're ridiculously resilient against ravages of the universe — ravages both foreign and domestic to our planet. Boiling doesn't kill them. Neither does extreme pressure nor extreme cold. A study published online July 14 in the journal Scientific Reports suggests that even Earth-pummeling asteroids, nearby supernova blasts and powerful interstellar bursts of gamma radiation would fail to wipe the buggers out.

That hardiness, along with their small size — reaching only about a millimeter (0.04 inches) long — makes tardigrades ideal candidates to make a first cruise outside the solar system. These moss piglets, as they're sometimes adoringly called, join C. elegans, a kind of mulch-dwelling nematode, as finalists to surf laser beams at relativistic speeds (or those approaching the speed of light) astride wafer-size spacecraft toward the far edge of the solar system, Space.com reports. The outer-space trip on laser-fueled wafers was borne out of NASA's Starlight program, whose aim is to use photons to push tiny objects at extreme fractions of the speed of light toward neighboring stars. [7 Huge Misconceptions About Aliens]

Tardigrades have a special power that makes them particularly useful for extrasolar experimentation: They're super-dehydrators and super-freezers. Under extreme dehydration and cold, they shrivel up into little balls to wait out the trauma. When conditions improve, they rehydrate (or melt their internal liquids) and carry on like nothing's changed. That means, the project's authors wrote on their website, that interstellar tardigrades could be periodically knocked out, stored and reawakened under different conditions to observe their behavior.

C. elegans, meanwhile, make good candidates for the trip because scientists already have a huge wealth of data about their genetics and behavior. At just under 1,000 cells in their bodies, they are fairly simple to study; and despite their small size, they can observe their environment, learn from it and adjust their actions as a result. Also, like tardigrades, they can be frozen and revived. [Extreme Life on Earth: 8 Bizarre Creatures]

It also helps, of course, that both species are on the far low end of the animal size scale. C. elegans are microscopic, and tardigrades are just on this side of visible to the naked eye. That's plenty small enough to pack some onto miniscule spaceships for Earthly life's first journey into the stars.

Though plans are still fluid, the Russian philanthropist and funder of the Breakthrough Starshot program Yuri Milner has said that the first interstellar trip could happen by 20 to 25 years from now, with one proposed target being our closest star system, Alpha Centauri.