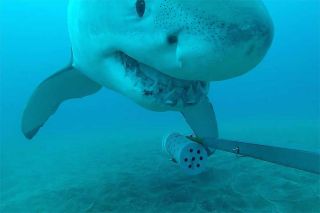 The curious great white shark that went for the bait.
(Image: © Massey University)

A great white shark left scientists "buzzing" after it grabbed a baited underwater research camera and dragged it to the surface — not once, but three times, according to researchers at Massey University in New Zealand.

It was likely more than the bait that attracted the hungry great white shark (Carcharodon carcharias). The camera's electrical signals may have also sparked the shark's interest, since sharks can detect electrical signals in the water, including the heartbeat of fish, said Andrew Nosal, an adjunct assistant professor of environmental and ocean sciences at the University of San Diego, who was not involved with the research.

"Although salt water is a decent conductor of electricity, these [electrical] signals can only be detected from close range," Nosal told Live Science. [Aahhhhh! 5 Scary Shark Myths Busted]

The researchers caught the stunning footage of the nearly 13-foot-long (4 meters) shark in the Kermadec Islands, also known as Rangitāhua, which are about 620 miles (1,000 kilometers) northeast of New Zealand.

The research team had just set up a baited remote underwater video (BRUV), a contraption that has two video cameras and a canister of bait fastened to a steel frame. Scientists usually deploy BRUVs to the ocean floor for 60 to 90 minutes at a time as a way to attract and then record sea life that approaches.

"When the gear is on the seabed, we don’t have a live feed, so we have no idea what we’re going to see when we review the footage at the end of the day," Adam Smith, a lecturer of statistics at Massey University, said in a statement.

In the past, the team's cameras had mostly recorded grey and whitetip reef sharks, as well as tiger sharks, hammerheads and "some very obnoxious octopus[es]," Smith said.

"Getting the great white at the end of the trip was definitely a highlight," he said. "It's likely that some great whites stop over while migrating between New Zealand and the tropics, like humpback whales do."

The footage showed the shark circling the bait for a few minutes before it approached the bait box and gave the box a few "curiosity bites," Smith said. "It then effortlessly picked up the entire BRUV set, swam with it up to the surface, and then dropped it back to the sea floor. It did this a total of three times, before losing interest and swimming off."

It's possible that "the shark was really hungry, excited and maybe confused by the contraption, which it likely has never seen before," Nosal said.

"I had to chuckle at the shark grabbing the BRUV stand and swimming with it for quite a ways — it reminded me a giant squirrel trying to hide a rare nut!" Christopher Lowe, a professor of marine biology at California State University, Long Beach, told Live Science in an email. "Also, I was just kind of glad it wasn’t one of my BRUVs! I wonder how often BRUVs go missing because big sharks carry them off?"

Tiger sharks are also known to grab onto BRUVs, said Lowe, who was not involved with the research.

But, despite the excitement generated by the great white shark sighting, the Massey researchers were discouraged by the low number of sharks they had recorded.

"We were happy to see large numbers of sharks on some submerged banks in the tropics, and New Zealand's Kermadec Islands, but there were surprisingly few in many other locations, probably due to overfishing," Smith said.

The researchers are still combing through the hours of footage they collected from the BRUV, which was part of a six-week expedition in the southwest Pacific that included waters around the French territory of New Caledonia, Fiji, Tonga, the Kermadecs and New Zealand.

In addition to providing census counts, the data will provide information about animal behavior and which species live in specific types of habitats, the researchers said.