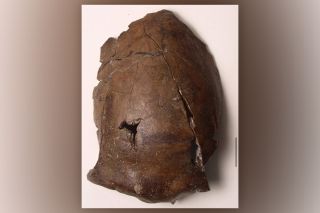 An ancient skull has much to reveal about the people who lived — and died — in the Papua New Guinea region thousands of years ago.
(Image: © Copyright Arthur Durband)

A 6,000-year-old partial skull found in what is now Papua New Guinea represents one of the earliest examples of human remains from the Pacific Islands region, and now it has additional significance: New research shows the skull may represent the first known evidence of a tsunami victim.

For decades, scientists suspected that there was something unusual about the sedimentary deposits near the small town of Aitape (EYE'-tuh-PAY') where the skull was discovered in 1929, and researchers recently revisited the site to dig a little deeper into the dirt where the skull had been buried.

They realized that certain patterns in the sediments displayed the trademark "fingerprints" of an ancient tsunami — an enormous and powerful wave that forms after massive disturbances in the ocean floor, such as earthquakes or volcanic eruptions, often devastating coastal regions. Thousands of years ago, a tsunami likely carried the skull to that spot, and it may have even claimed the person's life, the scientists reported in a new study. [10 Tsunamis That Changed History]

Tsunamis, which can crest at heights topping 1,700 feet (518 meters) above sea level, are among the deadliest natural disasters in the world. In 2004, an Indian Ocean tsunami followed hard on the heels of a magnitude-9.1 earthquake, inundating parts of South Asia and East Africa and killing 243,000 people. Geologic evidence shows that tsunamis have been occurring for thousands of years, and scientists are looking closely at the patterns these events left behind, to better understand the risks that we may face today, the study authors wrote.

When a tsunami sweeps over the coast, it carries mud, plants and sea life from ocean depths, leaving them behind when it recedes. To geologists, these particles stand out like beacons indicating a tsunami's passage, study co-author John Terrell, a curator of Pacific anthropology at The Field Museum in Chicago, told Live Science.

Tsunamis also surge and ebb very quickly, which means that the layers of sediment they deposit demonstrate disturbance patterns that differ from other sedimentary layers that formed over a typical geologic timescale, Terrell explained. In the case of the Aitape skull — which was found about 8 miles (13 kilometers) inland from the coast — it was clear to the researchers that the landscape at the time had been scoured, and then something had been deposited.

"This coastline is a cliff with mountains behind it, so you'd expect to see muds gradually building up," Terrell said. "And then you suddenly come across a layer like this, which is weird."

Though the Aitape skull had been well-studied, less was known about its resting place. In 2014, the study authors collected dirt samples from the site. They examined the size and chemical composition of sediment grains and studied fossils of microscopic ocean organisms in greater detail than had been done previously, turning to radiocarbon dating to pinpoint the period when the sediment layer had appeared.

They concluded that the deposits not only bore the hallmarks of a tsunami, but also that the event corresponded with the age of the Aitape skull, suggesting that the individual could have been a victim of a powerful natural disaster.

"After considering a range of possible scenarios, we believe that, on the balance of the evidence, the individual was either killed directly in the tsunami, or was buried just before it hit and the remains were redeposited," study lead author and paleo-tsunami expert James Goff, a professor at the School of Biological, Earth and Environmental Sciences at the University of New South Wales in Sydney, said in a statement. [7 Ways the Earth Changes in the Blink of an Eye]

But there's far more to this story than just an isolated incident of a deadly tsunami and its potential victim. During this period — roughly 3,000 to 7,000 years ago — Earth was undergoing very rapid environmental changes, with significant impacts on human societies and their adaptation to living in coastal areas, said study co-author Mark Golitko, an assistant professor in the Department of Anthropology at the University of Notre Dame.

"Sea levels were stabilizing after the ice ages, the climate was beginning to stabilize and these coastal environments were first forming," Golitko told Live Science.

In fact, what was formerly a steep cliff coastline in Papua New Guinea likely became accessible to people for the first time due to rising sea levels, Terrell said. Meanwhile, newly forming lagoons, river deltas and lakes transformed coastlines into places where people wanted to live, he said.

But life on the coast came with hazards, too. Coastal communities were highly vulnerable to tsunamis and were also subjected to the cycle of droughts and drenching rains brought by climate patterns El Niño and La Niña, Terrell told Live Science.

"It looks like paradise," he said. "But if we're right about the frequency of tsunamis, and if we add in the periods of drought and periods of incredible rain associated with El Niño and La Niña, then it suddenly begins to look like you're kind of trapped."

Studying this region and its clues from the past could help researchers better understand the strategies used by people thousands of years ago to mitigate these environmental risks, and could hold important lessons for addressing similar risks faced by coastal communities today, Golitko added.

"This is a story that has thousands of years of history that we're still seeing today," Golitko said. "It's a great place to live on one hand, and it's a really bad place to live on another — and that's something that has a resonant message for the modern age."

The findings were published online today (Oct. 25) in the journal PLOS ONE.