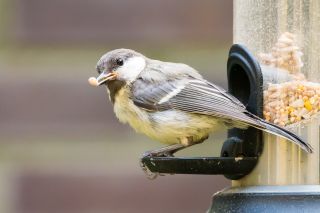 "Feed the birds, tuppence a bag!"

In the 1964 musical film "Mary Poppins," a poignant tune described a London woman who sold bread crumbs to feed the pigeons flocking at her feet. Feeding wild birds has been popular in the United Kingdom since the beginning of the 20th century, and a new study suggests this long-standing national habit is actually changing the shape of certain species' beaks.

Researchers recently looked at genetic variations in birds known as great tits (Parus major), which are common in the U.K. and in mainland Europe, investigating more than 3,000 birds from the U.K. and the Netherlands.

They found a genetic divergence between the groups in the two countries, which they linked to beak shape. After delving into museum collections and datasets for the U.K. population spanning 26 years, they confirmed that the U.K. birds' beaks were not only longer than their Dutch counterparts', but had increased in length dramatically in recent decades, likely associated with the widespread presence of bird feeders in the U.K., the study authors reported. [Images: How the Bird Beak Evolved]

Birds' beaks are highly specialized tools that help them succeed as foragers and predators in a range of environments — pecking seeds from the ground, snapping up insects on the wing, or digging for mollusks and crustaceans in the seafloor, for example. In fact, subtle differences in beak shape between Galapagos finches hinted at how the birds evolved to fill highly specific ecological niches, and played an important part in helping the naturalist Charles Darwin shape his theory of evolution by way of natural selection.

For the new study, the scientists investigated great tits at the genetic level. They identifed differences between populations in DNA sequences that resembled the genes linked to face shape in humans, and resembled DNA sequences associated with Darwin's finches' beak shapes, according to the study.

"It was the genome that led the way," study co-author Mirte Bosse, a researcher with the Netherlands Institute of Ecology and a postdoctoral candidate with the Department of Animal Sciences at Wageningen University, said in a statement.

Examinations of birds in museum collections — in the U.K. and in Europe — revealed that the U.K. birds' bills were "considerably longer" independent of overall body size, the study authors wrote. What might have driven this change? It could be that the British great tits were adapting to variation in their food availability in the U.K., the scientists suggested.

Whether in England or in the Netherlands, the birds' natural diets are much the same. But people in the U.K. are extremely enthusiastic about public bird feeding, spending twice as much annually on birdseed as do people in mainland Europe, and with bird feeders installed in over 50 percent of the country's gardens, the study authors reported. Longer bills might thereby be more efficient at prying seeds from feeders, providing an advantage over birds with shorter beaks.

"Although we can't say definitively that bird feeders are responsible, it seems reasonable to suggest that the longer beaks amongst British great tits may have evolved as a response to this supplementary feeding," study co-author Lewis Spurgin, an evolutionary biologist with the School of Biological Sciences the University of East Anglia, said in a statement.

The findings were published online Oct. 20 in the journal Science.