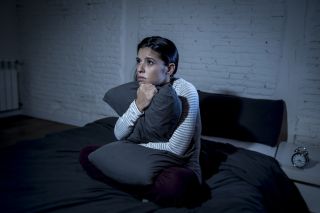 The quality of your sleep could play a role in how your brain responds to fear, which, in turn, could determine how likely you are to develop post-traumatic stress disorder (PTSD), a small, new study suggests.

People in the study who got more "rapid eye movement" (REM) sleep had less activity in the areas of the brain linked to fear in the face of a frightening event, compared with those who got less REM sleep, according to the study, published today (Oct. 23) in the Journal of Neuroscience.

The findings suggest that REM sleep may help keep fear levels low by altering how certain areas of the brain communicate with one another, the researchers wrote. This could mean that scientists could one day use a person's REM-sleep measurements, or how much time the person spends in REM sleep, to predict how resilient that person is to trauma or, conversely, how likely the person is to develop PTSD following a traumatic event, they wrote. [Get Better Sleep in 2017]

The new study "is a very good first step in understanding the mechanism of resilience," said Anne Germain, an associate professor of psychiatry and psychology at the University of Pittsburgh School of Medicine, who was not involved in the research.

In the study, 17 healthy college students had their sleep monitored at home for between five and 13 days, to establish their baseline sleep patterns, including their levels of light, deep and REM sleep. The students were paid to participate in the study.

Then, the students underwent a "fear conditioning" test: They were shown a series of red, yellow or blue lights that they had been conditioned to associate with mild electrical shocks. In other words, if a mild shock always followed a blue light, the student would anticipate, and likely fear, the shock when shown the blue light. During the test, the researchers monitored brain activity in the participants' amygdala, hippocampus and ventromedial prefrontal cortex — areas of the brain associated with the fear response. (The colored-lights test is a widely accepted model for studying PTSD, Germain told Live Science.)

Finally, the researchers sent the participants back to bed one more time. They monitored the subjects' sleep for one full night in the lab and then had them repeat the fear-conditioning test. The findings showed a noticeable correlation between the amount of REM sleep a person got and the magnitude of his or her fear reaction to the colored lights: The more REM sleep a person got during the baseline period, the less extreme his or her fear response was.

The finding suggests that REM sleep may play a key role in helping the brain prepare itself for, and withstand the effects of, emotional trauma, the researchers said.

There's growing evidence that the quality of a person's sleep has some link to the occurrence or severity of a number of psychological conditions, ranging from PTSD to depression. However, this study is the first significant one to explore whether a person's pattern of sleep can be used to predict whether he or she might be vulnerable to PTSD, the study authors said. The results of the new study could mean that scientists might someday be able to tell whether someone is suitable for a high-stress profession based on his or her normal sleep patterns, the researchers said.

Still, more research is needed to fully understand how REM sleep and PTSD are linked. It's not clear, for example, if getting more REM sleep could help keep PTSD at bay. [5 Surprising Sleep Discoveries]

Another question is whether a person can get too much REM sleep: Is there a "sweet spot" past whichtoo muchREM sleep might raise a person's risk of PTSD? REM sleep is when dreaming takes place, and there's a known connection between PTSD and intense dreams or nightmares, Germain said.

Germain noted that the researchers looked only at the average amount of REM sleep the participants got over the course of the study, and how this compared to the fear response. So it would be interesting to see if the response would change based on the amount of REM sleep each person got each night.

Still, the results are promising both for the field and people with PTSD, she said.

"This is a really good example of the importance of sleep in maintaining healthy emotional health," Germain said. "Sleep is still considered to be that phase when you do nothing at night. We all tend to cut back on our sleep to do everything that's so important during the day. But by doing that, we're really cutting ourselves short and putting ourselves at a disadvantage when facing important life events."