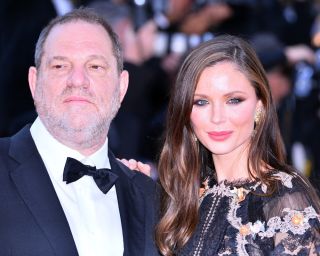 U.S. producer Harvey Weinstein and his wife Georgina Chapman attend a screening of the film "The Little Prince" in Cannes, France, on May 22, 2015.
(Image: © Mustafa Yalcin/Anadolu Agency/Getty Images)

In the wake of allegations that he harassed or assaulted more than a dozen women over more than two decades, film producer Harvey Weinstein is reportedly getting help for sex addiction treatment.

Initial reports suggested Weinstein had flown to Europe for inpatient rehab, though People magazine more recently reported that he is in Arizona at a five-star resort where he is allowed to use his cell phone but still "get help."

Weinstein is not the first powerful man to retreat to sex addiction treatment after being accused of sexual maleficence. Former congressman Anthony Weiner did a stint in sex rehab in Tennessee after sexting multiple women (and a 15-year-old girl) on Twitter. Golfer Tiger Woods went to treatment after news of his multiple extramarital affairs surfaced in 2009.

But sex addiction is a highly controversial subject in psychology. It's been rejected from the Diagnostic and Statistical Manual of Mental Disorders (DSM), which is sometimes called a psychiatrist's bible. Even mental health professionals who think there is such a disorder say they don't know exactly what's behind it, or if it really follows the patterns of an addiction. And many professionals think sex addiction doesn't exist at all. The debate is sometimes heated: One researcher, who asked not to be named, told Live Science that she's been sent a cease-and-desist letter by a professional group of sex addiction therapists due to her criticisms of their diagnoses. Research in the field is scant, and hobbled by a whole lot of cultural baggage around s-e-x, experts say.

"The APA [American Psychiatric Association] has a history of pathologizing normal sexual behaviors," Dr. Charles Samenow, a psychiatrist at the George Washington University School of Medicine, told Live Science. "We don't want to get into that trap again." [51 Sultry Facts About Sex]

What is sex addiction?

Proponents of sex addiction as a diagnosis don't actually use that name. They use the terms "hypersexuality" or "hypersexual disorder." Early versions of the DSM, the guidebook to mental health diagnoses used by most U.S. professionals, included references in its sections on "Psychosexual Disorders Not Otherwise Specified" to "distress about a pattern of repeated sexual conquests with a succession of individuals who exist only as things to be used." But this bare-bones description included no specific diagnostic criteria.

Hypersexual disorder as a stand-alone diagnosis was proposed for inclusion in the DSM-5, the 2013 update to the manual. The proposed criteria, as laid out in a 2010 paper in the journal Archives of Sexual Behavior, included experiencing at least six months of recurrent, intense sexual urges or behaviors associated with at least three of the following: time consumed by the sexual urges or activities that interfere with other basic activities, repetitive engagement in these fantasies or behaviors to lift a bad mood, unsuccessful attempts to control the fantasies or activities, and engaging in the activities "while disregarding the risk for physical or emotional harm to self or others." [Top 10 Controversial Psychiatric Disorders]

The urges or fantasies also had to be accompanied by personal distress and difficulty functioning, and could not be the result of drug or substance abuse.

Sex addiction as a a diagnosis isn't meant to let people off the hook for their behavior, said Alexandra Katehakis, the director of the Center for Healthy Sex in Los Angeles and a sex addiction therapist.

"It's about taking a high level of responsibility and saying, 'I did this. I'm responsible for it. Nobody made me do it,'" Katehakis told Live Science. Many treatment programs follow a 12-step model similar to the kind used for alcohol or drug addiction, and these programs urge followers to face up to their pasts and hold themselves accountable to the people they've hurt, she said.

The problem is that there just isn't much science to support the addiction model of sexual behavior — or any theory of hypersexual disorder thus far. Someone with an extreme fixation on sex could be compulsive, said Samenow, meaning they ruminate on their fantasies and become obsessed. Or they could be impulsive, meaning they have trouble controlling their immediate urges. They might be addicts in the same sense in which people are addicted to drugs, chasing a high that fades without more and more intense stimulation. Or they may just have extremely high sex drives, added Nicole Prause, a neuroscientist and founder of Liberos LLC, a sex-research institute in Los Angeles. [Hot Stuff? 10 Unusual Sexual Fixations]

The APA has repeatedly rejected the criteria for hypersexual disorder because those criteria are simply too broad, Samenow said. "They don't want to have diagnoses that capture folks who are just normal variants of human sexuality," he said. Complicating matters is the fact that sexuality research has not been a highly funded, highly sought-after area, Samenow added.

Instead, Prause said, most research on sex in relation to addiction is on pornography use. That's a problem, because it isn't clear whether research on pornography will translate to other sexual behaviors, like having affairs or hiring prostitutes, but it's also a problem because pornography isn't sex at all.

If the participants were addicts, their P300 signals should have shot up at the sight of sexy films, but that's not what Prause and her colleagues found. The size of the P300 signal had no relationship to the level of the participants' problems controlling their sexuality. In a follow-up study comparing people who reported being hypersexual with people reporting no problems controlling their sexuality, the individuals who were hypersexual actually showed a decreased P300 response compared with the non-hypersexuals, the opposite of what you'd expect to see in an addiction, Prause said.

Culture clouds the definition of sex addiction in other ways, too. A 2011 study in the journal Psychological Science found that for both men and women, the more power they had at work, the more likely they were to cheat on their spouses. Power can determine who gets to troll for affairs — and who gets away with harassment or assault.

"There is just some base rate of people who have a high sex drive and enjoy extra partners — say that's 20 percent of the population," Prause said. "Some of those people have jobs that make it very easy to get access to partners and to conceal partners."

Weinstein allegedly used his clout with the media to plant negative information about women he feared might out him for his conduct, CNN reported. Many women reportedly said they didn't come forward earlier because they knew the powerful producer could destroy their careers. [Why Sexual Assault Victims Wait to Speak Out]

"These are the questions that really plague us in making criteria that are objective," Samenow said.

He said he believes there are people who qualify as hypersexual and who need help. Similarly, Prause said that sexual compulsions or extremely high levels of desire can be problems that cry out for treatment, even if they don't fit the addiction model. But without good research into diagnostics, today's treatment options exist in a Wild West environment, she said. There has never been a randomized controlled trial of sex addiction treatment, Prause said. Whatever Weinstein is doing in Europe, it's not based on the gold standard of scientific evidence.

"There is literally no research-supported treatment," Prause said.