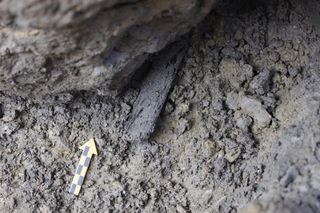 A fragment of a Bronze-Age elm wood bow found during an excavation in the Lötschberg Pass.
(Image: © Kathrin Glauser/Archaeological Service of the Canton of Bern)

Pieces of a 4,000-year-old bow, arrows and a wooden food container that belonged to a Bronze Age mountaineer have been found in a high alpine pass in Switzerland.

The artifacts are among several items found in what appears to have been a rock shelter beside a glacier near the top of the nearly 8,800-foot (2,700 meters) Lötschberg Pass, or Lötschenpass, in the Bernese Alps.

The bow and arrows, food box and other items are thought to have belonged to Bronze Age hunters or animal herders who took shelter beneath a large rock near the top of the pass around 4,000 years ago, said Regula Gubler, an archaeologist for the Canton of Bern government, which announced the finds this week. [See More Photos of the Bronze-Age Artifacts Found in Switzerland]

The site was discovered in 2011 by Beat Dietrich, the warden of a nearby mountain hut, while he was walking with his dog near the top of the pass, Gubler told Live Science. Part of a neve — a long-lasting snowfield at the head of a glacier — had melted more than usual, revealing pieces of ancient wood and leather.

Gubler and other archaeologists from the Canton of Bern Archaeological Service surveyed the site that year and recovered several items during an excavation in 2012, but bad weather prevented them from finishing the dig before the onset of winter.

"Since then we've had snow on the site, but this year we could finish it," Gubler said. "It was a warm summer and not much snow in the winter, and this combination melted the snow."

The latest finds, recovered by the researchers in September, include four pieces of shaped elm wood from what could be two Bronze Age bows, wood from possible arrow shafts, strips of ancient leather and a cord made from animal fiber attached to a button made from cattle horn, Gubler said.

The excavations in 2012 also found pieces of curved elm wood from bows, as well as three flint arrow heads, a cow-horn container and a wooden box that had once held roughly ground grain flour.

Carbon dating showed that the objects originated from between 2000 and 1800 B.C., according to tests conducted by the Canton of Bern Archaeological Service.

Gubler explained that the artifacts all came from an area that measures about 21 square feet (2 square meters), inside a hollow among the rocks just below the top of the pass.

The finds suggest a single person or small group had taken shelter in the hollow around 400 years ago, and left the objects behind, she said.

"It can be very windy up there at 2,600 meters [8,530 feet] above sea level, but that hollow is quite sheltered, as we found out ourselves while working there," Gubler said. "We think it may have been a shelter underneath [a] big rock, but the rock must have broken in the intervening years."

The bows and arrowheads suggest the Bronze Age mountaineers may have been hunters: The pass is still a prime hunting area today, with many game animals such as chamois and ibex, Gubler said. But, they may also have been herders, who carried bows and arrows to protect their animals from predators like bears and wolves, she added.

Tests on the wooden container found at the alpine archaeological site in 2012 have shown that it once contained a roughly ground flour made from a variety of grains, including wheat, rye, barley and smelt, according to research published in June in the journal Scientific Reports.

Gubler thinks the box was used to carry dry flour that could be mixed with water or milk before eating. "It's lighter if you just take flour with you," she said.

The Bronze Age alpinists could have chosen a food container made from wood for the same reason: "You wouldn't take a pottery vessel with you in the mountains — it would be far too heavy."

The 4,000-year-old artifacts were the oldest yet found in the Lötschberg Pass, although fragments of wood and leather dating to the medieval period and Iron Age have also been found near the hollow at the top of the pass, according to Gubler.

"There are also finds in other parts, but the hollow is the most interesting part of the whole pass," she said. "If you come up over the glacier, which you could have in the past, then that would be the best way to come off the glacier and go up over the pass."

The discovery confirmed historic records that indicate the pass was a major route for hunters, herders and traders for centuries, between the Bernese Oberland to the north and the Valais region to the south, she said. And the region may hold more secrets yet.

"I think there's more to find up there in the pass generally, that it's not finished yet," Gubler said. "We'll have to keep an eye on the whole area — we might not have found all the interesting corners of that pass."