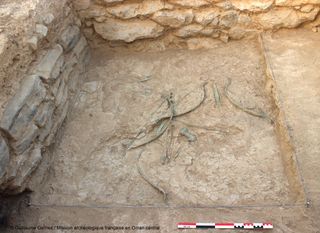 Bows, arrows, daggers and battle-axes made of bronze found in Arabia may have been offerings to a deity of war, researchers said.

These artifacts are the first miniature, imitation weapons that archaeologists have found in prehistoric Arabia, and might shed light on the practices of the mysterious peoples who created the artifacts, scientists added.

This new cache of artifacts dates to the Iron Age, which lasted from about 900 B.C. to 600 B.C. The collection was uncovered in the Sultanate of Oman, a country on the coast of the Arabian Peninsula, near the town of Adam, which is located at the frontier between Oman's desert and oasis regions. This area in central Oman was completely unexplored by archaeologists until French scientists carried out the first excavations there in 2007, researchers said. [Photos: Glittery Treasures Discovered in Bronze Age Tomb]

In 2009, the archaeologists discovered a site known as Mudhmar East, which is made up of two main buildings as well as a number of additional structures. The site is located at a strategic crossing of several trade routes at the foot of a mountain named Jabal Mudhmar,and near one of the largest valleys in Oman.

The larger of the two buildings is about 49 feet (15 meters) long and is made of cut sandstone blocks and bricks made of compressed earth. In this building, Guillaume Gernez, an archaeologist at Pantheon-Sorbonne University in Paris, and his colleagues uncovered an exceptional collection of bronze weapons scattered on the ground in a small room, apparently having fallen off the furniture, shelves or walls on which they were originally placed.

These artifacts included five bows, two quivers, six arrows, about 50 arrowheads, five battle-axes and five daggers with crescent-shaped pommels. These weapons were all made of bronze, even the bowstrings. Until now, bows made of metal were totally unknown in the Arabian Peninsula and the Middle East from those periods, the researchers said.

These artifacts could not have been used as weapons because of the quality of the material, which would not have stood up to combat, as well as their slightly reduced size, the researchers said. For instance, the bows were on average only about 27.5 inches (70 centimeters) long, and the quivers about 13.7 inches (35 cm) long. (Usable short bows are usually at least about 36 inches, or 91 cm, long.)

Instead, Gernez and his colleagues suggested these artifacts were miniature imitations of real weapons, perhaps meant as offerings to a deity of war, or gifts among chiefs or other elite figures, or some other as yet unknown tradition. The scientists noted the building at this site might be a religious complex; they also unearthed fragments of ceramic incense burners and small bronze snakes, items often linked to rituals that occurred at that time.

"This archaeological ensemble reveals a ritual practice that was not known until now in this region," Gernez said.

The researchers noted these artifacts were created at a time when metallurgy was on the rise in the eastern Arabian Peninsula. These advances went hand in hand with an increasingly complex society then, as shown by a concurrent proliferation of fortified sites and monumental architecture.

Understanding the politics and traditions of the society that created these artifacts remains a difficult task, the researchers said. "We need to excavate and further explore the area and the surroundings and compare them with many other sites to understand the whole system," Gernez said.