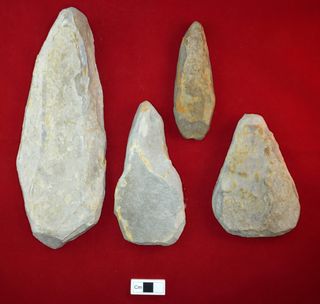 The stone tools found by the CRAG team vary in size, from around 220 millimeters (8.5 inches) in length, down to about 50 millimeters (2 inches).
(Image: © Ian Brooks/CRAG)

Amateur archaeologists excavating a Bronze Age site in the United Kingdom have discovered a cache of unusual stone tools unlike any that have been found before.

The tools appear to have been deposited deliberately — perhaps ceremonially — in what would have been a stream around 4,500 years ago, according to the researchers.

Around 20 of the roughly triangular stone hand tools, of various sizes, were found at the excavation site in the Clwydian Range, a series of hills in Denbighshire in northeast Wales, by the Clwydian Range Archaeological Group (CRAG) during four weeks of excavations in July and August. [See More Photos of the Stone Tools at the Bronze-Age Site]

CRAG is made up of local people who have trained for several years in archaeological techniques under the guidance of professional archaeologists.

Ian Brooks, an archaeologist employed as a consultant by CRAG, said the tools discovered by the group were like nothing found before in the area.

He said the tools were made from a hard limestone found locally, but not in the immediate area of the excavation.

"They are rough slabs of the limestone, which have been shaped to produce one pointed end," he said.

The tools vary in size, between 2 inches (50 millimeters) long to about 8.6 inches (220 mm) long. "But they all have this characteristic point at one end, which has then been battered — you've got pitting and distinctive damage on the end, so they've been heavily used," Brooks said.

The purpose of the tools is unknown, and future work by the archaeological team would include examining the utensils in more detail. But, it's possible that the tools were used for chipping ornamental designs onto rock surfaces, he said.

"One of the things that you do get in the Bronze Age is the decoration of natural boulders and rock faces, producing things like cut marks and rings and suchlike," Brooks said. "The point on these things would be about the right sort of size for pecking that sort of design."

Brooks explained that all of the mysterious stone tools were found at the bottom of what would have been a stream around 4,500 years ago, on a plateau northeast of the Moel Arthur hill fort — one of six hill forts in the Clwydian Range thought to have been built around 800 B.C., during the Iron Age in Britain. [24 Amazing Archaeological Discoveries]

Brooks thinks the site where the tools were found could be more than 1,000 years older than the hill fort itself, based on carbon dating of stones from an archaeological feature known as a "burnt mound." An excavation of the burnt mound by CRAG members in 2013 found that it was used to produce large amounts of hot water, by heating stones in a fire and dropping them into a trough-shaped pit filled with water from the nearby stream, he said.

Carbon dating has revealed that the burnt mound, located beside the former streambed, dates to between 2456 to 2583 B.C., Brooks said.

While the purpose of that activity is not known, it's possible that the hot water was used for cooking, or for brewing beer, or for producing steam for a sweat lodge, according to Brooks.

The limestone tools did not seem directly related to the activity at the burnt mound, but they appeared to have been deposited on purpose at a particular spot nearby, in what would have been a running stream at the time, he said.

Brooks thinks the tools and the activity at the burnt mound were probably associated with a variety of activities going on at the site for a time during the Bronze Age.

Geophysical surveys, funded by CRAG in 2011 and 2012, indicated that the plateau near the burnt mound and the ancient stream may have included a small settlement of roundhouses, a typical style of dwelling in Bronze Age Britain.

The inhabitants of the roundhouses were likely to have been agriculturalists, rather than nomadic hunter-gatherers, Brooks said. In the early Bronze Age, the climate in North Wales was warmer by around 3.6 to 5.4 degrees Fahrenheit (2 to 3 degrees Celsius), and there was evidence that grain crops were grown at that time on the broad tops of hills in the area.

"The likelihood is that the Clwydian Range was more intensively used than the Vale of Clwyd itself, which is likely to have been wet and nasty, with heavier lands which were less suitable for simple plowing," Brooks said.

Fiona Gale, the county archaeologist for Denbighshire, said that the limestone tools and other evidence from the CRAG excavations show that there were people living in the area much earlier than the Iron Age, when the hill forts were built.

Six hill forts were found in the Clwydian Range, two of which were the subject of ongoing excavations by archaeologists from the University of Liverpool and Oxford University, and the work by CRAG fit in with that wider project, Gale said.

The purpose of the hill forts themselves remains something of a mystery, she said, with modern research suggesting that the traditional explanation — that they were mainly used for defense against attacks by hostile communities — was probably not their main function.

Instead, many researchers now think that the construction of hill forts may have mainly been a symbol of status: "look at us, we can build all this," Gale said.

Others suggest that they served as central places for the distribution of produce, or that some may be linked to particular local festivals, or that they provided protection for herd animals against predators like wolves and bears.

"These are all things that we don't know, but with more work and more excavations, we will get some answers to some of these things — the more we do, the more information we will have," Gale said.