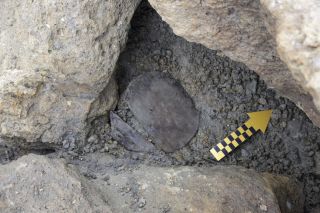 This Bronze Age wooden box was found in the Swiss Alps.
(Image: © Archaeological Service of the Canton of Bern)

About 3,500 years ago, an intrepid traveler in the Swiss Alps lost their lunch box.

Archaeologists recently discovered the wooden vessel as the ice where it was buried melted near the top of a mountain. They even uncovered clues about the box's final contents; a chemical analysis revealed faint traces of cereals like wheat and rye, perhaps from a hearty whole- grain porridge.

Baskets, barrels and boxes made from organic materials like wood or leather rarely survive in the archaeological record, but some examples have been found in the Alps before. In fact, Europe's oldest mummy, Ötzi the Iceman, was found with two birch-bark containers. These lightweight vessels were probably preferred over ceramic containers for long journeys over snowy mountain passes. (Hikers today are careful about every ounce of equipment they pack. It probably wasn’t much different during the Bronze Age.) Just this month, the mummified remains of a couple buried in the Alps 75 years ago turned up. [Top 9 Secrets About Ötzi the Iceman]

Archaeologists have identified some ice patches in the Alps where artifacts that were once frozen in time are being newly exposed as the climate warms. One such place is an ice patch near the summit of the Lötschenpass at an altitude of 8,700 feet (2,650 meters). The wooden box was discovered there in 2012. It has a round base made of Swiss pine and a rim made of willow, and it is sewn together with splint twigs of European larch. It also had a mysterious residue on its surface.

Armed with new chemical techniques, archaeologists can now analyze residues of food and drink — like animal and dairy fats — left on seemingly empty ancient pots. However, it's rare to find lipids (or fats) from cereals on artifacts, even though grains like wheat, barley and rye were important after the emergence of farming, the researchers wrote in their summary of the findings, published Wednesday (July 26) in the journal Scientific Reports.

"One of the greatest challenges of lipid analysis in archaeology has been finding biomarkers for plants," André Colonese, a bioarchaeologist at the University of York in England, said in a statement. "There are only a few and they do not preserve very well in ancient artifacts."

For that reason, Colonese and his colleagues were excited to find that the residue from the Bronze Age box contained a class of lipids that's usually found only in cereals. Preserved traces of plant protein confirmed that this vessel contained two types of cereal grains: wheat and barley or rye.

"Detecting a molecular marker for cereals also has widespread implications for studying early farming," another study researcher, Jessica Hendy, of the Max Planck Institute for the Science of Human History, said in the statement. "It enables us to piece together when and where this important food crop spread through Europe."

One next step will be to look for these compounds in ceramic artifacts, Colonese added. That could prove whether these biomarkers could really be used as a new tracking tool for early uses of grains when archaeologists lack more visible evidence like charred grains or seeds.