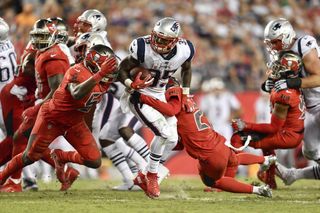 The lawyer for Aaron Hernandez is suing the National Football League after an autopsy found that the 27-year-old player, who died by suicide after being convicted of murder, had a brain disease called chronic traumatic encephalopathy (CTE). A new study suggests that kids who play tackle football before age 12 are at risk of developing CTE, which can cause mood swings, aggression and dementia-like symptoms. And yet, another recent study found evidence of CTE in the brains of 99 percent of NFL players examined posthumously.

Despite this spate of bad news, there is no consensus on the answer to that question. Some researchers think football is best-avoided. Others think the sport can be made safer with equipment and training modifications, or at least that there's not enough evidence to throw out the entire game. [See Images of Brains with CTE]

"There are other things we would need to know in order to answer that," said Erik Swartz, a kinesiologist at the University of New Hampshire. But, Swartz said, researchers can't kick the can down the road for much longer.

"We don't want to continually say we need to learn more or we want to know more," he told Live Science. "We know a lot more today than we did 20 years ago. The science is better. The evidence is stronger."

Chronic traumatic encephalopathy was once known as "punch-drunk syndrome" because it was thought to be a problem mostly exclusive to boxers. It's not. In 2002, an autopsy of former Pittsburgh Steelers football player Mike Webster, who died at 50, revealed the distinctive mark of CTE: a buildup of a protein called tau. Abnormalities in tau are also present in patients with Alzheimer's disease, and the symptoms of people with CTE are dementia-like. They include impulsivity, loss of memory, confusion, tremor and movement problems as well as depression and anxiety.

CTE can currently only be diagnosed by autopsy, though that may change. A study published in the journal PLOS ONE in September found that an inflammatory protein called CCL11 circulates at high levels in the cerebrospinal fluid of people with CTE compared with levels in people with Alzheimer's or without long-term brain damage. Researchers don't yet know if the protein increases early or late in the disease or whether the levels of the protein correspond to disease severity, but CCL11 could be a potential biomarker for diagnosing the disease during life, they wrote.

The inability of researchers to diagnose the disease until after a person dies is one of the problems facing scientists who are trying to figure out just how dangerous football really is. In July, Boston University-led research found evidence of CTE in the brains of 110 of 111 former NFL players that they examined. The limitation to this study is that because CTE can't be diagnosed until after death, families who noticed dementia-like symptoms in their loved ones were disproportionately likely to donate their brains to research. A diagnosis of CTE while the patient is alive would pave the way for more accurate statistics.

Another problem is that many questions about how CTE develops and who is most vulnerable are still unanswered.

"Everyone has a different genetic background," said Jonathan Cherry, a postdoctoral fellow at Boston University and the lead author of the CCL11 research. "They have different environmental factors that can come into play."

What researchers do know, Cherry said, is that CTE doesn't require people to experience actual concussions, which are traumatic brain impacts that cause noticeable symptoms like confusion, nausea and ringing ears. Subconcussive impacts, if repeated enough times, can also lead to CTE. In the CCL11 study, Cherry and his colleagues found that the inflammatory protein, like CTE itself, correlated not with the number of concussions someone received in life, but with years of football played.

"Something we're trying to answer is how many hits is too many hits," Cherry told Live Science.

In the absence of sure information, there are attempts to make football safer. A major push, funded by the NFL, is to design better helmets. The newest to show up on professional fields is the Vicis Zero1, a helmet with a larger surface area and a flexible outer shell that gives during a collision "like a car bumper," Vicis CEO Dave Marver told Live Science in an email. Instead of traditional padding, the helmet's interior is made up of a series of flexible "columns," which can twist and buckle to absorb rotational forces. The helmet scored above all others in the NFL's 2017 laboratory testing. It's already being used in games by Kansas City Chiefs quarterback Alex Smith, according to Business Insider, and the University of Mississippi announced in March that it would be trying out the helmets for its players as well. Vicis plans to continue refining its technology, Marver said, and the company's engineers are using sophisticated computer modeling and new types of testing to continue to improve the helmets.

Still, Vicis is careful not to market its product as concussion proof.

"As long as there are impact forces resulting from collisions, risk of concussion remains," Marver said. Different people have different thresholds for concussion, Marver said, and no helmet is foolproof enough to protect against all potential hits.

Helmet companies have overstepped on concussion-reduction claims before. Helmet company Riddell marketed its helmet as reducing the risk of concussion by 31 percent, even after a biomechanics lab warned the company in 2000 that no helmet could promise to reduce concussion risk. In 2013, Riddell was docked $11.5 million for making those claims as a result of a lawsuit filed by a Colorado family whose son suffered a severe concussion during a game.

Some researchers argue that helmets are part of the problem — or at least not a clear-cut solution. The larger the helmet (and the VICIS Zero1 is larger than many), the more surface area there is for impact, the University of New Hampshire's Swartz said. (More impacts mean more brain trauma over time.) Helmets also offer a false sense of security to players, Swartz said. When your head is cocooned in inches of plastic and padding, you're more likely to ram it into other people than if you're helmetless. [5 Ways Science Could Make Football Safer]

Helmets undeniably provide head protection, Swartz said, and they're a necessary part of the game. But he and his colleagues are testing a method of helmet-free training for college and high-school players. The idea, Swartz said, is to teach players how to tackle and block without head protection so that their instinctive desire to protect their head becomes muscle memory.

"I played rugby for eight years, and it never occurred to me to lead with my head going into contact," Swartz said. Rugby players get concussions and head injuries, he said, but they don't endure as many head impacts as football players do.

In a study in which University of New Hampshire football players were randomly assigned to receive the helmetless training or not, Swartz and his team found that those who'd trained without helmets experienced 30 percent fewer head impacts over the course of a season than those who trained with helmets. The researchers have done a larger randomized trial in high-school students, but those results have yet to be published.

Whether 30 percent is enough to prevent long-term damage, no one knows.

"We won't be satisfied with a certain threshold," Swartz said. "We just want to get it as low as we can."

Head impacts could be even more damaging for athletes who are still recovering from a prior concussion. That's why concussion diagnosis is so important. Even so, diagnosis among athletes hasn't been as throrough as it needs to be, experts said. [5 Facts About Chronic Traumatic Encephalopathy (CTE)]

When an athlete gets hit on the head in the field, National Collegiate Athletic Association (NCAA) standards call for a battery of cognitive and neurological tests that assess things like symptoms and balance on the spot. That's not enough, said Semyon Slobounov, a professor of kinesiology and neurosurgery at Penn State University and author of  "Concussions in Athletics: From Brain to Behavior" (Springer-Verlag New York, 2014). To really assess concussion damage, Slobounov told Live Science, athletes need a direct assessment. At Penn State's Center for Sport Concussion Research and Service, that assessment can include functional magnetic resonance imaging (fMRI), diffusion tensor imaging, electroencephalograms and other methods of directly measuring brain function.

"Concussive injury is definitely linked to pathophysiological alteration of the brain," which means meaning changes to the structure and function of brain tissue, Slobounov said.

That alteration can persist, even once-obvious symptoms like confusion or dizziness clear up, he said. In other words, letting athletes back on the field when symptoms abate doesn't guarantee that their brains have really recovered. Most players are cleared to play after a week, Slobounov said, while studies on blood flow show that alterations in brain function persist past 30 days. The damage may be compounded in players who take more hits before the brain heals.

At the same time, Slobounov said, athletes' brains recover from concussions faster than the brains of nonathletes, and he and his colleagues have found that light, low-impact exercise started as early as two days post-injury can speed recovery. The benefit of exercise for the brain is one reason Slobounov is among the experts who are reluctant to throw the football out with the bathwater.

"We should be concerned about disability and mobility and obesity issues and kids not getting exercise," Slobounov said, while still characterizing the questions surrounding concussions as "a serious problem."

The benefits of a physically active lifestyle make Swartz hesitate to condemn football, as well. There may eventually be enough evidence to suggest that the full-tackle game be delayed to older ages, he said. In September, Boston University researchers published data in the journal Translational Psychiatry that showed that individuals who began playing before age 12 were more likely to show depression, problems with cognitive functioning and trouble with behavioral regulation in middle age than those who had started later, as assessed over the phone and in online psychological testing. More research is needed to make any policy changes or guidelines, those researchers wrote.

"If a parent were to decide, 'My child is going to play football, but they're going to start off for two or three years in flag football, then progressively move over to a tackle football,' that is almost objectively a safer approach," Swartz said, simply because the child will receive fewer total head impacts. The age at which children have the capacity to weigh the risks and rewards of the game is also worth thinking about, he said.

For Cherry, who disentangles the postmortem consequences of CTE, it's hard to see how to reduce the risk enough.