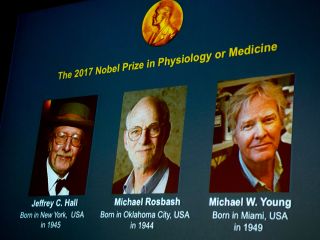 Winners of the 2017 Nobel Prize in Physiology or Medicine (L-R) Jeffrey C Hall, Michael Rosbash and Michael W Young are pictured on a display during a press conference at the Karolinska Institute in Stockholm on Oct. 2, 2017.
(Image: © Jonathan Nackstrand/AFP/Getty)

BERLIN—Three scientists who made key discoveries on the workings of our internal clock have been awarded this year's Nobel Prize for Physiology or Medicine.

The 9 million Swedish kronor ($1.1 million) award will shared by Jeffrey Hall of the University of Maine, Michael Rosbash of Brandeis University in Massachusetts and Michael Young of Rockefeller University in New York.

If you've ever worked a night shift or taken a time zone-crossing flight, you know that sleeping out of sync with the planet can be disruptive. Hall, Rosbash and Young found important biological mechanisms that drive our ability to go to bed at night and be awake during the day.

In the 1980s, the three scientists isolated the "period gene," which had been theorized to control the biological clock, or circadian rhythm, in fruit flies. Hall and Rosbash then discovered aprotein called PER that is encoded by the period gene and fluctuates over a 24-hour cycle; PER levels build up at night and drop during the day. [Nobel Prize in Medicine: 1901-Present]

"Without this, we couldn't argue for later school times on evidence-based grounds; we couldn't look for the best time to take your medicine; we couldn't find an interrelation between metabolic disorders and clock disorders," Kramer told Live Science. "It's not only affecting people in their everyday life —in jet lag, school hours and shift work. It's also affecting chronobiologists' arguments for keeping you better in sync —the inside time with the outside time."

The prize came as a surprise to at least one of the winners. Thomas Perlmann, the Nobel Commitee's Secretary, told journalists in Stockholm during a press conference that when he reached Rosbash by phone this morning, the scientist was silent, and then said, "You are kidding me."

Scientists and researchers who gathered here to watch a live feed of the announcement at Charitéhad written down their predictions for the winners —but no one had guessed Hall, Young or Rosbash would get the award.

Most had pegged the winner to be Emmanuelle Charpentier, director of the Max Planck Institute for Infection Biology here. Charpentier is more than just a hometown favorite; she has been predicted to win the prize for the last few years for the work on the gene-editing technology known as CRISPR–Cas9.

But Ganten added that circadian rhythm research is a "very important topic," that has not yet been fully incorporated into practical medicine.

"The Nobel Prize has a great value in discovering great science that is known in a very specialized area," Ganten told Live Science. "Now it comes to the forefront. This will certainly stimulate research in this area."

There are still big unanswered questions in circadian research. Kramer said it is not fully understood what role the clock plays in evolution, and it is still "really early days" in translating knowledge of the clock to the clinic. Further research, he said, could answer questions such as "What can we do to strengthen your clock? What can we do to avoid all these pathologies from disrupted or de-synchronized clocks?"