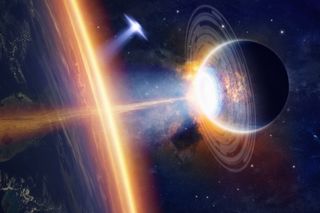 Just six years after radio preacher Harold Camping promised the apocalypse, and five years after the end of the Mayan calendar was supposed to extinguish life on Earth as we know it, new doomsday predictions have arrived. This time, they come via YouTube and a man named David Meade, who claims that the first spiritual sign of the apocalypse will arrive tomorrow (Sept. 23).

Meade's theories meld biblical prophecy with astronomy. He claims that on Sept. 23, there will be a rare alignment of the sun in the constellation Virgo — with the moon just to the east — with nine stars and three planets (Mercury, Venus and Mars) clustering around the constellation's head, like a crown. This is supposed to be the sign foretold in the beginning of Revelation 12, which reads, in the New International Version of the Bible: "A great sign appeared in heaven: a woman clothed with the sun, with the moon under her feet and a crown of twelve stars on her head. She was pregnant and cried out in pain as she was about to give birth." [Doomsdays: Top 9 Real Ways the World Could End]

The date, Sept. 23, is 33 days after the total solar eclipse that crossed the United States in August. That number is meaningful to Meade because Jesus Christ is said to have been 33 when he died.

This astronomical sign, Meade said, is evidence that the end is near. In October, he said, the mysterious Planet X will pass close to Earth, which will mark the beginning of seven years of Tribulation — a period of time that some say will be full of hardships before the second coming of Christ — followed by the rapture of true believers to heaven and a millennium of peace. [Oops! 11 Failed Doomsday Predictions]

Meade's theories echo a lot of ideas that have been floating around conspiracy and doomsday circles for years. Planet X, sometimes known as Nibiru, was supposed to have crashed into Earth during the Mayan apocalypse of 2012 or maybe in 2011, or was it 2003? The problem with this idea is that a rogue planet hurtling toward Earth just doesn't exist. The hysteria over the mythical planet got so pitched in 2011 that NASA scientist David Morrison made a YouTube video to explain that Nibiru isn't real, and that if a giant planetary object were zooming through the solar system, it would be easily visible from Earth and easily detectable from gravitational changes in the orbits of planets in our solar system. (Confusing matters, there is a possible "Planet X" beyond Pluto, but astronomers have not proved its existence yet. If it exists, it orbits far at the outskirts of the solar system. "Planet X" is what scientists call possible planets that have yet to be identified.)

Eclipses, too, have long been associated with the end. According to the writings of 16th-century Franciscan friar Bernardino de Sahagún, Aztecs made human sacrifices during a total solar eclipse, fearing that if they did not, the darkness would never lift. "It was thus said: 'If the eclipse of the sun is complete, it will be dark forever! The demons of darkness will come down. They will eat men,'" de Sahagún wrote.

The Vikings, too, felt they had to do something to prevent perpetual darkness — in their mythology, a wolf named Skoll was eating the sun, and they had to make noise to scare the monstrous beast away, lest the sun vanish forever.

Total eclipses, though, are visible from someplace on Earth roughly every 18 months. The alignment of the sun in Virgo is not particularly rare, either — it happens once a year, every September. Earth's view of the sun's relationship to the stars simply changes as it moves through its yearly orbit. That's why astrologers developed the concept of the 12-month zodiac.

Nor are the other stellar alignments around Virgo on the 23rd that unusual, according to EarthSky. The moon passes through every constellation of the zodiac throughout the month, so it's regularly just east of Virgo. The crown of 12 stars upon Virgo's head on the 23rd is an arbitrary designation, according to EarthSky, because there are more than nine stars in the constellation Leo, which is supposed to make up the stellar portion of the crown. [Monsters of the Night Sky: Strange Constellations to See in Fall]

Repetition doesn't appear to faze Meade. When asked by Live Science whether the failed Planet X predictions of recent years gave him any pause in his own prognostications, he responded by email, "There's never been a year like 2017. Read my book."

In fact, there's plenty of evidence that failed doomsday predictions don't do much to forestall future "prophets." Nineteenth-century preacher William Miller, founder of the group that would eventually become the Seventh-day Adventists, predicted doomsday in 1843, then in 1844, and died five years later, still thinking the end was nigh. Camping, who took out billboards to advertise the supposed coming apocalypse in 2011, had previously promised the end of the world in 1994. (Camping died in 2013.) In one famous 1954 case, a woman named Dorothy Martin convinced her followers that although the end of the world was coming, a UFO would drop by to save them. When nothing happened on the appointed date, Martin and her followers decided not that they'd been wrong, but that their faith had saved the world from doom. A psychologist who had infiltrated the group wrote about their reaction in the book "When Prophecy Fails" (Harper-Torchbooks, 1956).

"The real tragedy of this kind of thinking is that many people do take it seriously," said Allen Kerkeslager, a comparative religion professor at St. Joseph's University in Philadelphia. Sometimes a mythical apocalypse really does become the end of the world, at least for believers. Between A.D. 66 and 73, the Jews of Judea revolted against their Roman occupiers, Kerkeslager said, bolstered by prophecies that promised that their struggle was part of a great End Times battle and that God would rescue them at the last minute. God did not, and tens of thousands died.

"There are so many past cases showing that no amount of contrary evidence or failed prophecies will ever deter some of the people who believe that the Bible has codes about an apocalyptic end that will leave their own group triumphant," Kerkeslager told Live Science in an email. "For such people, there is no need to negotiate or compromise in delicate international political crises and arms races, no need to work out peaceful resolutions with countries deemed somehow part of an 'axis of evil,' and no need for concern with environmental problems such as the impact of human-caused climate change on a planet that is going to be destroyed and recreated anyway. So all of this does have very real and very dangerous negative social implications."

For most people, it's easy to dismiss Meade, and certainly the idea that the world will enter its last throes tomorrow has no more to back it up than the umpteen failed predictions that came before it. But apocalyptic thinking is everywhere, said Robert Joustra, a political scientist at Redeemer University College in Ontario and co-author of the book "How to Survive the Apocalypse:Zombies, Cylons, Faith, and Politics at the End of the World" ( Wm. B. Eerdmans Publishing, 2016).

Postapocalyptic shows like "The Walking Dead" or "The Leftovers" are a secular way of dealing with the same questions that the Book of Revelation would have been written to answer, Joustra said: What is the point of all this suffering? What is the meaning of life? How should we live now, in the midst of all our struggles?

The symbolism in the apocalyptic Book of Revelation would have had a very different meaning to the early, badly persecuted Christians who read it compared to people of the 21st century, Joustra said. They would have taken certain numbers, like 7, to represent perfection and completion, not as an invitation to start pulling out the calculator to predict the date of the rapture. For them, Revelation would have offered a measure of comfort, promising that their suffering under Roman rule would eventually amount to victory and eternal peace.

A more individualistic approach to the apocalypse dominates today's pop culture, Joustra said. Ever since the invention of the atomic bomb, he said, mainstream apocalypse narratives have shifted from something that God will do to something humans will cause. The question then becomes what sort of person an individual will be once you strip away laws, institutions and social mores, he said. [Doom and Gloom: 10 Post-Apocalyptic Worlds]

It's a concept that would have flummoxed the ancients, Joustra said. For example, the ancient Greek philosopher Aristotlebelieved that humans were defined by their relationships, institutions and communities. Stripping those things away and then asking what was left would be almost nonsensical, Joustra said.

"It's a much more individualistic way of thinking about human nature and the apocalypse that I think is different from anything else in human history," he said.