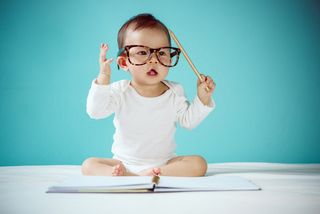 Have you ever struggled to open a stubborn package? If so, that may be a good thing…if your baby is watching.

A new study finds that babies as young as 13 months old can learn perseverance by watching you muddle through failure and repeatedly attempt to reach a goal.

In the study, researchers presented babies with a challenge to activate a musical toy box. Babies who had just witnessed an adult struggle with a different kind of task a few seconds earlier, such as removing a key chain from a carabiner, tried harder to overcome their own little challenge, compared with babies who didn't witness such a struggle. [11 Facts Every Parent Should Know About Their Baby's Brain]

The findings, published today (Sept. 21) in the journal Science, suggest there is "potential value in letting children 'see you sweat,'" the researchers wrote in their paper. "Showing children that hard work works might encourage them to work hard too."

Previous studies have shown that school-age children who persevere through modestly complicated tasks tend to be more successful academically later in life. However, scientists have not been able to determine how and when children develop such true grit.

Most studies in this area have focused on children in grade school and middle school. Researchers at Stanford University, for example, found that seventh-graders who thought that intelligence was malleable and that effort determines achievement outperformed their peers who thought intelligence was fixed. The study was conducted over a two-year period through middle school.

In the new study, researchers at the Massachusetts Institute of Technology (MIT) wanted to see if babies might be inspired to persevere by witnessing a struggle that resulted in success. To do so, they recruited more than 260 babies (and their guardians).

The babies, ages 13 to 18 months, were placed in three testing categories: A third of them watched an adult struggle and succeed with a task; a third watched adults succeed in a task easily; and a third were in a control group, not witnessing adults perform any kind of task.

The task was either opening a container or removing a key chain from a carabiner. In the first group, the adult would pretend to struggle for 30 seconds with the task and then succeed, all the while making eye contact with the baby and saying things such as, "Hmm, I wonder how I can get my toy out of here?"

In the second group, the adult completed the task without struggling in 10 seconds, and then repeated this task twice more over the next 20 seconds.

In all the groups, an adult would give the baby a trick music box with a big button that was inert and a hidden button that played music. The adult would activate the musical sound, hand the toy to the baby and leave the room. [Top 5 Benefits of Play]

Although no babies found the hidden button, those who had witnessed an adult struggle pushed the inert button significantly more often and probed the toy longer before giving up, compared with the babies in the other groups. In fact, there were no significant differences in the amount of time both other groups examined the toy.

The researchers hope that "the study reassures parents that they don't have to make everything look like it comes easily," said lead study author Julia Leonard, a graduate student at MIT.

Leonard added that more research is needed to gauge the effects of watching adults struggle through tasks on babies' perseverance. "We have a lot of respect for parents and wouldn't presume to use a single laboratory study as a basis for parenting advice," Leonard told Live Science.

"However, we hope the study might interest parents, and we'd be interested in knowing from parents whether simply showing children a couple of examples of struggling before succeeding seems to help their children persist more on tasks where the parent is confident that the child might succeed with effort," she said.

And what about watching parents struggle through a task unsuccessfully? The researchers said they hope to investigate this in future studies. If an adult fails to achieve a goal, the baby might conclude that the task is beyond its ability, the researchers said.