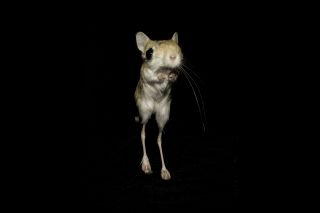 Four legs good, two legs bad? Not if you're a jerboa, a tiny, bipedal, desert rodent. These miniscule mammals get around using only their two hind legs to hop, skip and jump across their arid habitats.

And the creatures mix and match those locomotion styles to produce hard-to-follow moves that help them evade the jaws of hungry predators, according to a new study.

In fact, researchers found that jerboas' fancy footwork was much more unpredictable than the movements of other small desert rodents that scurry on four legs to avoid trouble. This likely lends jerboas a distinct advantage when a hunter is in hot pursuit, the researchers in the new study said. [The World's 6 Smallest Mammals]

Jerboas live in deserts in northern Africa and in Asia, and they belong to a family of bipedal rodents called Dipodidae. While all the rodents in this family jump, jerboas have exceptionally long, spindly hind limbs that can be three times as long as their forelimbs. To put those proportions into perspective, imagine a person who is 6 feet (2 meters) tall, but whose arms are only 11 inches (27 centimeters) long.

Jerboas not only have dramatically elongated legs; they also use these limbs in a more versatile manner than do other bipedal rodents, such as kangaroo rats and jumping mice. Unlike their bipedal cousins, who merely jump, jerboas employ several gaits: running, jumping with both legs or hopping from one leg to another. And researchers discovered that jerboas habitually transition between these gaits midstride, tossing in bursts of speed and hairpin direction changes to produce dizzyingly evasive maneuvers.

Scientists often study how animals move by placing them on treadmills, but the study authors wanted to observe how jerboas might move in the wild. And to do that, they needed to give the jerboas room to jump around in all directions, study lead author Talia Moore, a postdoctoral fellow with the department of Ecology and Evolutionary Biology at the University of Michigan, told Live Science in an email.

"I knew that I had restricted the motion of the animals in the lab by putting them on a narrow racetrack, so I wanted to give them an open area to see what they would do," Moore explained.

Moore and her colleagues built an outdoor mesh enclosure at a desert location in China where they had previously seen jerboas; that way, the animals would freely encounter and respond to stimuli they would typically come across in their natural habitat, the researchers said. Because jerboas are active at night, the researchers illuminated the enclosure with infrared lights, which the animals couldn't see, and used multiple cameras to record the creatures' actions, Moore said.

"Lo and behold, they jumped around like crazy! It's a good thing we had them in the enclosure — otherwise, we would never have been able to recapture them!" she said.

After the cameras recorded the jerboas, the researchers devised a method to measure the unpredictability of the animals' movements, then compared those moves to the scampering of quadrupedal rodents. The scientists' calculations — measuring and analyzing movement over the ground in 3D space — showed that the jerboas' hodgepodge motion was, in fact, more unpredictable than the movements of rodents that used four legs.

"This increased unpredictability likely arises from their unique gait use and gives them an edge in the evolutionary arms race between predator and prey," Moore said in a statement.

Predators like snakes and birds, which are common in the jerboas' desert ecosystems, typically track their prey's movements, Moore said. To catch the animals, the predators line up a strike by predicting where the prey is going and intercepting its path, which means that an animal that is harder to track will be harder to catch, Moore said.

"This form of predation fails spectacularly when the prey locomotion is unpredictable, like [that of] the jerboas," she said.

The findings were published online Sept. 5 in the journal Nature Communications.